The Young and the Restless (Y&R) Spoilers: Ashley’s Shocking Life or Death Confession – Is She Dying? 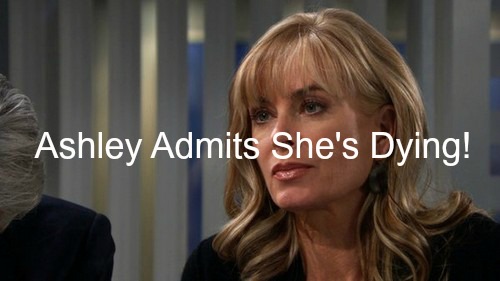 “The Young and The Restless” (Y&R) spoilers indicate that Ashley Abbot’s (Eileen Davidson) medical crisis will amp up in coming days to the extent that she’ll struggle to hide her problems – but will finally make a confession about her diagnosis on New Year’s.

But it’s to whom Ashley makes this life or death confession that’s surprising. The Ashley illness reveal will go down just after Abby Newman (Melissa Ordway) walks down the aisle with Ben “Stitch” Rayburn (Sean Carrigan).

Does Ashley tell her daughter or her son-in-law that she secretly loves about her brain problems? Nope! Perhaps Ashley comes clean to her baby daddy Victor Newman (Eric Braeden)… No way. Why would Ashley share any of her personal issues with the Mustache?

Also on hand at the event is Ashley’s brother Jack Abbott (Peter Bergman). Will Ashley come clean to her brother? That’s also a no. And Ashley will also not have a medical heart to heart with her rarely seen sister Traci Abbott (Beth Maitland).

Sometimes when you’re carrying a big burden, it’s better to not go to someone close to you – that way you get the advantage of perspective without all the emotional attachment. Ashley will instead unburden herself to Dr Simon Neville (Michael E Knight), her new lab buddy.

Turns out that Dr Neville might be the exact person that Ashley was wise to confess to because this could result in an enlightening turn in their new research project. Neville already knew that Ashley was intensely interested in his treatment protocol that saved Hilary Curtis (Mishael Morgan).

Now the off-kilter doctor will know why she was so into the experiment. Ashley has a neurological condition that is causing her pain – and killing her, that’s centered in her brain – a tumor, most likely. Ashley believes that Neville might be her only hope to get a cure before time runs out.

And once Ashley reveals her serious diagnosis to Neville, he can target his research to curing her. Will Ashley become Neville’s human Guinea pig while he treats her brain condition?

While Ashley seems concerned at the moment for the propriety of the paperwork for the research she and Neville are doing at the Jabot lab, if her condition worsens – and it will – Ashley will likely let the legality slip by to fast-track the treatment she desperately needs.

But remember when Neville first started treating Hilary, there were setbacks, she wandered off and then suffered side effects. She’s okay now, but will Ashley’s treatment protocol also go awry?

With Paul Williams (Doug Davidson) keeping a close watch on Neville, could the doc end up behind bars while still treating Ashley which then puts her further at risk? Will Genoa City’s resident mad scientist be able to save Ashley’s life?

Stay tuned to CDL for updates on this and other “The Young and The Restless” spoilers and more.