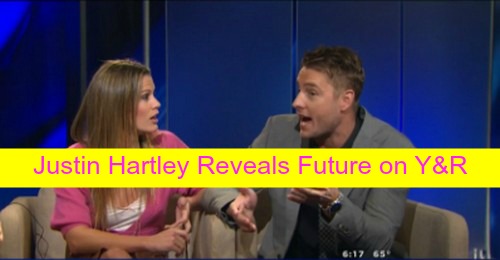 “The Young and the Restless” (Y&R) spoilers tease that Adam Newman [Justin Hartley] will have to make a tough decision; does he stay to recuperate in his hospital bed or risk death to save his family when he learns the Newman building is on fire? It doesn’t take a rocket scientist to predict what his next course of action will be – after all he’s Adam Newman and Adam don’t scare!

Melissa Claire Egan and Justin Hartley sit down with CBS Local Los Angeles to talk about the Halloween gala fire and what could lie ahead for Chelsea and Adam Newman. Justin Hartley stated that in the Halloween bash that Adam took a hit. “Adam takes a hit, but it’s err karma after all the things Adam’s pulled. I can’t say much about what will happen, but I can say I am not going anywhere,” Justin explained.

In the short clip, Adam opens the stairway door, screaming for his wife, Chelsea. He is wearing a T-shirt with fireman’s pants and boots. He is clutched over in pain as he goes up the stairs. Adam comes face to face with the devil- who is about to reveal their identity – will it be Gabriel Bingham! Does Adam meet himself in the devil’s disguise?

It was rumored for a while that Adam would rush to Chelsea’s [Melissa Claire Egan] side to save his family from the blaze. Adam’s heroic efforts rescue his family and friends will in tune save him from serving time in prison. His future is not quite known since TPTB has been tight-lipped on how Adam will escape his prison sentence, and who will survive the fiery disaster.

Justin and Melissa explained that they don’t know what is going on the show much earlier than the fans. They receive the script about one week before filming, and fans see the material approximately four weeks later.

During sweep months, they receive the scripts days before filming, giving them very little time to memorize their lines. Justin noted, “And the script changes often. Sometimes we don’t know what material they went with after filming so many versions.”

It looks like Adam will definitely survive and based on Justin Hartley’s comments he will not be leaving Y&R. Justin told Soap Opera Digest a few weeks ago that he felt honored to be selected to portray the iconic Adam Newman. Don’t forget to come back later for juicy “The Young and the Restless” spoilers, rumors, and updates.