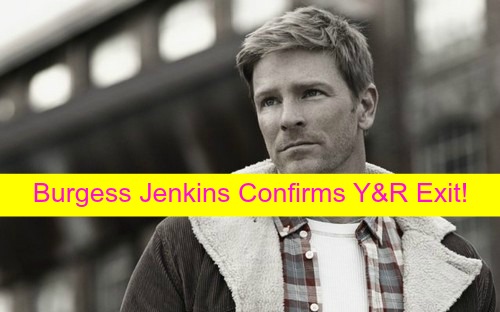 “The Young and the Restless” (Y&R) spoilers are in with Burgess Jenkins confirming to Soap Opera Digest that he is OUT as Billy Abbott. It has been speculated for weeks that Jenkins was leaving the daytime drama due to the fans not embracing him in the role.

Burgess released a statement, “It’s been a terrific time, but after a lot of thought, I have made the difficult decision to leave The Young and the Restless. Commuting back and forth from the East Coast, where my home and family are based, has been challenging. I’ve had a great ride in Genoa City, and I will miss our talented cast and crew tremendously. I would like to thank all the amazing fans for their support, Jill Farren Phelps [executive producer] and Chuck Pratt [head writer/executive producer] for their excellent leadership, and everyone at Sony and CBS for this opportunity.”

It isn’t clear how TPTB will handle the character of Billy when Burgess Jenkins exits the role. He debuted as Billy in 2014, and desperately tried to fit in the role. He never could appease the fans- or make the character his own. Truthfully, it was not fair for him to step into the iconic role after fan favorite Billy Miller exited the role – fans will have a difficult time embracing anyone in the role, after Miller portrayed Billy in much a perfect manner.

Now, the mystery is will TPTB recast the role immediately, kill Billy Abbott, or leave him in a coma, burned and with plastic surgery, possibly replaced by Jason Thompson, or shuffle him off-screen like they did with Phyllis Summers [Gina Tognoni] for over a year?  Even though some fans have called for Burgess Jenkins firing, most fans were sad to learn he will be leaving the role.

It looks like Burgess decided that he can no longer commute from the East coast to L.A. each week. He may have realized that he isn’t the right fit for the role, no matter how hard he tried. Despite his flaws in the role – and there were many – Burgess Jenkins will be missed, and we wish him well in his future opportunities. Don’t forget to check back later for juicy “The Young and the Restless” spoilers, rumors, and news.