The Young and the Restless Spoilers: Caitlyn Jenner Campaigning For Spot On Y&R Cast? 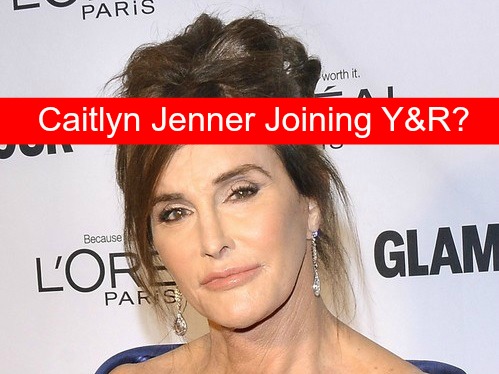 Caitlyn Jenner tagged along to support pal Candis and was rubbing elbows with the cast and crew backstage and the “Y&R” cast and production team were thrilled to have Caitlyn Jenner on set and made a bigger deal of her being backstage than they did of Candis Cayne’s actual appearance.

It’s no secret that Caitlyn Jenner has wanted to get into acting – at one point she was even rumored to be campaigning for a role on “Orange Is The New Black.” What better place to kick off an acting career than on a daytime drama where tons of award winning actors and actresses got their start?

If Caitlyn gets a couple of acting credits under her belt, especially one on “Y&R” then job offers are sure to start rolling in. Set gossip teases that while Caitlyn Jenner was on set at “Y&R,” she was feeling around for a spot on the CBS soap’s cast.

Obviously, TPTB were thrilled at the idea – because it would be a publicity firestorm. And after seeing “The Bold And The Beautiful” success with their transgender storyline featuring Maya Avant (Karla Mosley), now seems like as good a time as any to get Caitlyn Jenner to Genoa City.

What do you think “Y&R” fans, would Caitlyn Jenner make a good addition the CBS soap opera’s cast? What kind of role do you think the writers could set up for her? Could she be someone’s love interest? And would Caitlyn help or hurt “The Young And The Restless” ratings?

Let us know what you think in the comments below and be sure to check back often for more juicy “Young and the Restless” spoilers!