The Young and the Restless (Y&R) Spoilers: Chelsea Suspicious as Sage Drawn to Adam – Will Grief Turn to Passion? 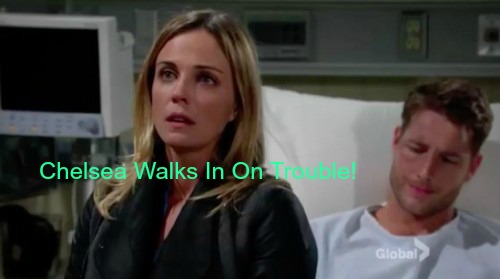 “The Young and the Restless” spoilers (Y&R) tease a grieving Sage Newman [Kelly Sullivan] may turn to Adam Newman [Justin Hartley] for comfort while grieves the loss of her newborn baby boy, Christian.

Victor [Eric Braeden] pointed out that he suspects that Christian is not Nick’s [Joshua Morrow] son, but Adam’s child. Is it possible that Sage turns to Adam for comfort because they share a child together?

Next week’s spoilers- November 16-20- stated that Sage tells Nick that she isn’t feeling up to niece Katie Newman’s first birthday bash. She initially plans to go to the NICU to visit the babies there to feel closer to her son. She finds herself drawn to see Adam, and she opens up to her former fake hubby in his hospital room on Tuesday November 17.

Sage pours out her troubles to her former spouse telling him how hurt; she fears that Nick doesn’t feel lost without their son. She tells him she doesn’t know how to go on without her child and feels like she may never find her way.

Adam listens to her and tells her it will all work out, advised her to open up to her husband because he seems very important to her. Unfortunately, Chelsea [Melissa Claire Egan] barges in on Sage and Adam while the two are definitely too close for Chelsea’s comfort!

Head scribe, Chuck Pratt, Jr explains that Sage and Adam’s history is extremely complex, and being together is easy for both. They aren’t in love with each other (yet!), and they know each other very well.

Kelly Sullivan noted, “Adam was there when Sage lost Gabriel and then Constance [Sally Kellerman] and she feels a deep connection to him. Somehow through everything that they had been through together, she feels comfortable around him, and feels like he is the only person she can talk to right now.”

In soap operas, often talking to a friend leads to a sizzling night of passion, which is how Adam became the suspected father in the first place! It seems very likely it could happen again, especially considering that Sage is suffering so much right now. Also as Chelsea’s suspicion and discomfort with Sage being close to Adam grows, we expect that in typical soap fashion, Chelsea may soon have something real to worry about.

A part of Sage will be drawn to Adam and there’s not much she can do about it. He looks exactly like the love of her life – Gabriel. The fact is, Sage is using Adam as an escape from reality, a break from having to work on her own relationship with her husband. And, Adam will do anything in his power to be the hero to those he cares about- including Sage.

Could Sage and Adam’s connection cause a rift in both of their marriages? Will Adam and Sage hit the sheets, again? How will Chelsea react to the former marriage couple’s newfound friendship? Don’t forget to come back later for juicier “The Young and the Restless” spoilers, rumors, and updates!