The Young and the Restless (Y&R) Spoilers: Sage and Adam Affair Begins – Ashley Suspicious of Billy and Phyllis 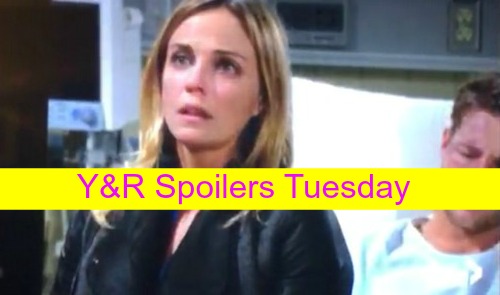 “The Young and the Restless” spoilers for Tuesday, November 17, tease that Ashley (Eileen Davidson) will wonder what Billy (Burgess Jenkins) and Phyllis (Gina Tognoni) are up to. Billy cares about Victoria (Amelia Heinle), but it’s hard for him to pass up a plot to bring down Victor (Eric Braeden). Billy could put his relationship in jeopardy if he’s not careful.

In Monday’s episode, Phyllis and Billy’s discussion leads to what could be the start of a sneaky scheme. Tuesday’s preview video shows Ashley eyeing them suspiciously. Ashley will suggest that she’s not sure whether she should be worried about Victor or Billy and Phyllis. The answer is probably all of the above.

Meanwhile, Nick (Joshua Morrow) will struggle to cope with everything he’s been through. Now that Christian is gone, Sage (Kelly Sullivan) and Nick just can’t seem to truly connect. “The Young and the Restless” spoilers say Nick will confide in Dylan (Steve Burton) as he tries to decide what to do.

Nick will confess that he can’t go home, which will puzzle Dylan. When Dylan asks what he means, Nick will explain that he can’t go home to Sage. Right now, their relationship only reminds them of the tragedy they’ve experienced. A loss like this could end up tearing Nick and Sage apart. That’s not good news since Sage is currently growing much closer to Adam (Justin Hartley).

Sage and Adam have been able to find some common ground lately. They’ve had plenty of problems in the past, but they’ve put the drama behind them. Adam has provided a little comfort to Sage by talking about the child he lost with Chelsea (Melissa Claire Egan). Is this purely a friendship or could it turn into more? In the preview video for Tuesday’s episode, Chelsea looks intrigued when she finds them sharing an intimate conversation.

Chelsea will ask Adam and Sage if she’s interrupting something. Perhaps Chelsea is just a smidge jealous of the way her hubby is cozying up to the former con woman. It sounds like Chelsea and Adam will remain committed to each other for now, but Y&R rumors hint that there could be trouble in paradise down the road. Stick with the CBS soap for updates on the obstacles they’ll encounter.