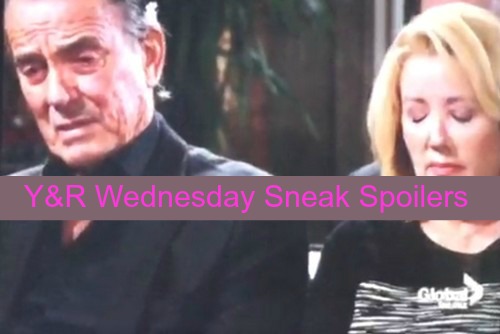 “The Young and the Restless” (Y&R) spoilers for Wednesday, November 11, tease that Nick (Joshua Morrow) will say a few words at the memorial service for Christian. With tears in his eyes, Nick will announce that he’s there to honor Christian’s brief time on this earth.

When Nick and Sage (Kelly Sullivan) learned their son was dead, they were heartbroken. Sage was particularly shaken by the terrible news. This was supposed to be Sage’s miracle baby, but those dreams have been shattered. Christian was given to this overjoyed mother and he was quickly taken from her.

Of course, Sage doesn’t know that Christian may have been literally taken—as in kidnapped. Y&R rumors hint that Dr. Anderson is planning on giving this baby to Sharon (Sharon Case). Unfortunately, something’s bound to go wrong in this plot. Nothing ever really works out for Sharon.

Dylan’s (Steve Burton) suspicions will likely continue. Once Sharon is off all the harsh drugs, she’ll probably recognize that Dr. Anderson’s (Elizabeth Bogush) behavior was bizarre. Babies tend to look kind of generic when they’re born, but there’s a possibility that Sage and Nick could recognize their little one. Nick and Sage may be distraught right now, but Dylan and Sharon will be the ones with broken hearts down the road.

Elsewhere, Gwen (Nadine Nicole) will tell Devon (Bryton James) that she loves Neil (Kristoff St. John) and would do anything for him. “The Young and the Restless” spoilers say Devon will wonder just how far Gwen would go. It sounds like Devon is starting to wonder what Gwen’s game is.

Paul will suggest that he has some questions to ask, which should leave Dr. Neville on edge. Dr. Neville made it clear that he wasn’t going to take the fall for the Hilary (Mishael Morgan) mess on his own. You can bet that if Dr. Neville goes down, he’s taking Neil and Gwen with him. Still, Dr. Neville is a resourceful guy and he might be able to spin this situation. Stick with “The Young and the Restless” for updates on Dr. Neville’s next move.

So Y&R fans, what do you think about Nick and Sage trying to make peace with their son’s death? How will they react if Christian turns up in a crib at Sharon’s place? How long can Neil, Gwen and Dr. Neville keep a lid on what happened to Hilary? Let us know what you think in the comments below and don’t forget to check CDL often for the latest “Young and the Restless” spoilers, rumors, updates and news.