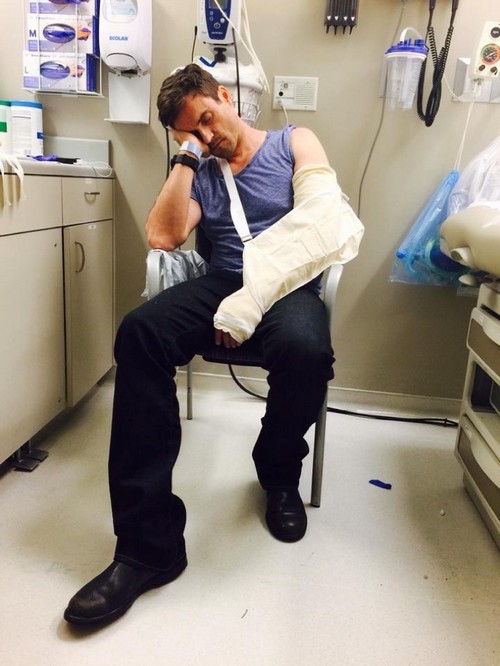 “The Young and The Restless” spoilers tease that Y&R cast member Daniel Goddard’s character Cane Ashby might be rocking a cast on his arm in upcoming scenes on the CBS soap opera. Over the weekend Daniel took to social media to let Y&R fans know that he had an unfortunate accent while filming a fight scene for the daytime drama – and he broke his elbow!

Goddard posted a picture of himself sitting in the emergency room with his arm in a sling, and looking absolutely miserable (not that we blame him.) “The Young and the Restless fan fave captioned the photo, Broke my elbow filming a fight on the set. I am so bummed out.” Daniel’s fans flooded social media and Twitter with well wishes for the Cane Ashby portrayer – and then the speculation began. Was Cane going to be off the canvas for a while, due to the injury and who was he fighting?!

“The Young and the Restless” spoilers for November 2015 recently revealed that Cane Ashby and Scott Elrod’s character have an epic feud coming up over Lily (Christel Khalil), and general consensus on the internet is that the “fight scene” in question was most likely between Joe and Cane. Apparently, it is some sort of right of passage in Genoa City to knock out Joe Clark – he certainly has a knack for rubbing people the wrong way.

Will Daniel Goddard miss work because of his broken elbow? Most likely not, considering there is a fight scene coming up – the Y&R writers could easily write his injury in to the story line and just blame his broken elbow on his scuffle with Joe Clark (or whomever else). If soap opera writers can manage to write pregnancies and wheelchairs into a storyline, we’re sure they will find a way to work in an arm in a sling.

So Y&R fans, are you as upset about Daniel’s arm as we are? Do you think the fight was with Joe Clark over Lily? Let us know what you think in the comments below and don’t forget to check CDL tomorrow for more “The Young and the Restless” spoilers and news!