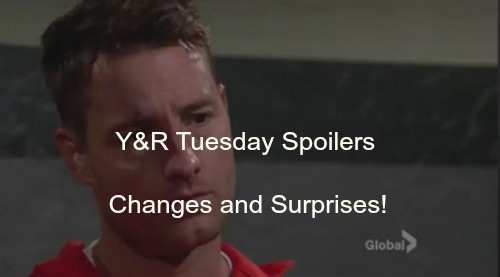 “The Young and the Restless” (Y&R) spoilers for Tuesday, November 24, tease that Adam (Justin Hartley) will find out Victor (Eric Braeden) is back on his side. It looks like Adam has a lifeline once again. Victor will suggest that maybe he was wrong about Adam’s continued involvement with Ian (Ray Wise). Naturally, Adam will wonder why Victor is reinstating his support. Victor will reply that Chelsea (Melissa Claire Egan) convinced him to change his mind.

Now that Victor knows Adam didn’t try to double-cross him, he’ll resume his efforts to get Adam out of prison. Victor will give Adam updates on his appeal and state that he’s confident Judge Elise Moxley (Jensen Buchanan) will make the right decision.

Elise had better make this go Adam’s way unless she wants the whole world to know about her affair with Victor… or even worse. That news would not go over well. Elise is a judge and her husband is a senator. If Elise plans on avoiding a scandal, she may have to let her morals take a backseat – of course having had the affair with Victor means she isnt exactly a moral icon.

Meanwhile, Devon (Bryton James) will refuse to give up on Hilary (Mishael Morgan). “The Young and the Restless” spoilers say Devon will urge Hilary to remember the love they shared. Hilary will insist that all she remembers is cheating on Neil (Kristoff St. John). Old feelings seem to be returning for Neil thanks to Hilary’s devotion.

Devon stole Hilary away from Neil and now Neil might get the chance to do the same thing to his son. Neil let go of his revenge plot, but it appears he could inadvertently get payback after all.

Elsewhere, Dylan (Steve Burton) will try to get to the bottom of the Dr. Neville (Michael E. Knight) situation. Dylan doesn’t know exactly what this eccentric doc’s agenda is, but he intends to find out. In Tuesday’s preview video, Dr. Neville hears someone at the door and asks if it’s Hilary. Dylan responds by charging through the door at full speed and breaking the chain.

It sounds like Dr. Neville will be in a tight spot. However, this brilliant doc will try to think fast. Dr. Neville will give Dylan one of those injections he’s so fond of. Y&R rumors hint that things could get interesting. Stick with the CBS soap to see how Dylan will react to whatever mysterious substance Dr. Neville uses.

A stunning confession and a marriage on the rocks make for one interesting week. Don’t miss @youngandrestlesscbs this week on @cbsdaytime! #YR #cbsdaytime