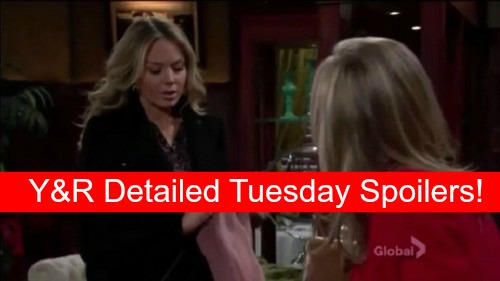 “The Young and the Restless” spoilers for Tuesday, December 15, tease that Stitch (Sean Carrigan) will give Abby (Melissa Ordway) some startling news. When Stitch gives her updates on what happened during the fire, Abby will want to know if he slept with Ashley (Eileen Davidson) in the rubble.

Stitch will indicate that they only professed their love. They felt a connection, but Stitch will insist that it was only because death seemed imminent. Abby will get upset and hint that there may not be a wedding after this revelation.

At the athletic club, Abby will ask Ashley if she has feelings for Stitch. Ashley will reply that nothing is going on between them. Stitch is with Abby now and Ashley thinks their love really has a chance to last. Stitch will walk in and let Abby know he’s sorry he hurt her.

Abby will suggest that the wedding will move forward as planned and they’ll share a kiss. Later, Ashley will collapse after getting a headache in the park. Is Ashley’s aneurysm acting up again?

Jack (Peter Bergman) will prepare to announce all details about Victor (Eric Braeden) and Marco (Peter Bergman). However, a glance at Phyllis (Gina Tognoni) will prompt Jack to have a change of heart. Jack will stop the press conference and agree to give Victor the $500 million he’s asking for.

Victor will gloat and talk about protecting his family. Jack will insist that all Victor cares about is his own ego.

At Sharon’s (Sharon Case) house, Nick (Joshua Morrow) will talk to his ex about Sage (Kelly Sullivan). Nick will confess that he’d hoped he could be a better man to Sage than he was to Sharon. Faith (Alyvia Alyn Lind) and Sharon will step out of the room for a minute and Sully will start to cry.

Nick will pick the baby up and talk to him. Sully will fall asleep and Faith will return with Sharon. Faith will wonder who Nick thinks Sully looks like. Nick will say that Sully will get the best of both his parents.

Other “Young and the Restless” spoilers reveal that Billy (Burgess Jenkins) won’t have much luck getting another chance with Victoria (Amelia Heinle). Nikki (Melody Thomas Scott) will show up and get filled in on their uncertain future. Victoria will be upset about Billy’s latest lie, but he’ll snap back that she lets Victor get away with everything.

Victoria will leave in a huff and Nikki will suggest that Billy has gone too far this time. Nevertheless, Billy will vow to win back his love. Victor will arrive and mock Billy’s optimism. They’ll argue and Victor will tell Billy that he’s responsible for his family’s downfall.

Michael (Christian LeBlanc) will bring Victor the papers to settle the lawsuit. Victor will sign them and get a text about the money that’s being transferred.

At Jabot, Jack will tell Phyllis how much he cares about her. He just couldn’t risk destroying their relationship by spilling the beans about Marco. Phyllis will worry about what the future holds for the Abbotts’ company. Billy will pop in to apologize, but Jack won’t listen. Jack will declare that Billy needs to pack up his belongings and get out of his office.

After everything he’s done, it seems Billy is no longer welcome at Jabot. Will Billy come up with a plan to undo the damage? Y&R viewers will have to stay tuned to see how all of this will turn out. Stick with the CBS soap to learn what’s next for the Abbotts.