The Young and the Restless (Y&R) Spoilers: Luca and Marco Move On Victor – Adam Off To Jail Despite Heroics?

BY Chrissie Williams on November 8, 2015 | Comments: one comment
Related : Soap Opera, Spoiler, Television, The Young and the Restless 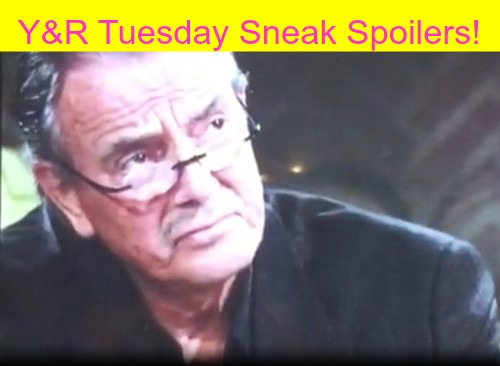 The Young and the Restless (Y&R) spoilers for Tuesday previews tease that Adam [Justin Hartley] COULD begin his prison sentence this week. That’s if Christine [Lauralee Bell] gets her way. Phyllis [Gina Tognoni] feels blindsided that her husband, Jack [Peter Bergman] and his brother, Billy [Burgess Jenkins] wanted to extend an offer to help rebuild Newman Enterprises to Victor Newman [Eric Braeden].

Christine arrives at the hospital with Michael and a sheriff in tow. Chelsea [Melissa Claire Egan] tells Christine, “Now it not a good time, Adam needs his rest.” Adam looks very ill; fans have speculated that he finds out something else is wrong with him.

Christine coldly barks to him, “It is now time to go to prison. “ Michael pulls Christine aside, and accuses her of playing dirty and being obsessed with seeing Adam go to prison to pay for something that the victim’s parents have forgiven him.

Luca Santori [Miles Gaston Villanueva] arrives to see Victor [Eric Braeden] with an interesting business proposal. Luca tells him, “My family would like to offer their assistance with your recovery.” Victor looked at him confused because Victor wanted Luca and Marisa [Sophia Pernas] to find their way out of Genoa City, not lend his help [and money] to help him rebuild his company. Is Marco [Peter Bergman] somehow lurking behind all of this?

At Jabot, Billy wants to offer Newman Enterprises help to rebuild the company. He thinks it is the right thing to do, and Jack [Peter Bergman] does not disagree. Phyllis cannot believe what she is hearing? Her husband and Billy want to offer help to Victor Newman.

She says as Jack looks away from her to avoid the confrontation, “You want to save the man who put me through intense humiliation? Why is the hell would you ever want to save Victor?”

The big question this week is if Adam will be transported to prison or if somehow his father, Victor will be able to find a loophole to get him out of serving any time. Will Christine admit that Adam was a hero saving all those lives out at the Newman fire or state that he intended to escape from his hospital bed to flee his sentence? Don’t forget to come back later to CDL for juicy “The Young and the Restless” spoilers, rumors, and news!