The Young and the Restless (Y&R) Spoilers: Abby Happily Plans Stitch Wedding – No Clue Fiancé In Love With Ashley 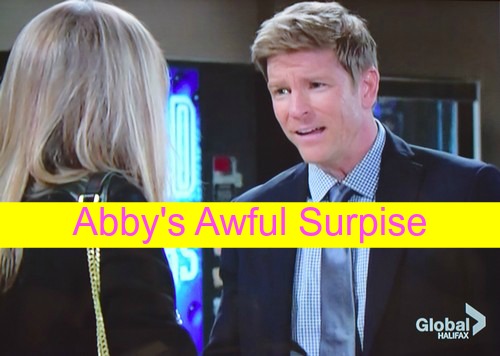 “The Young and the Restless” (Y&R) spoilers indicate that Abby Newman (Melissa Ordwary) will begin happily planning a wedding to Stitch Rayburn (Sean Carrigan) on Monday, November 9. Abby has no clue that her fiancé is in love with Ashley Abbott (Eileen Davidson).

As Abby sits in Stitch’s hospital room waiting for the injured doctor to wake up, Ashley is in the hallway with Billy Abbott (Burgess Jenkins) who is comforting his older sister. Billy is confused as to why Ashley is so distraught.

Billy suspects that Stitch means more to Ashley than she is letting on. Ashley makes an excuse saying she is very excited about Abby’s engagement and impending nuptials. Ashley changes the subject and the two agree that it was Ian Ward (Ray Wise) who tried to kill everyone.

Abby is thrilled when Stitch finally wakes up, but it’s not Abby that Dr. Rayburn wants to see. Stitch tries to tell Abby he wants Ashley but the newly-engaged Ms. Newman won’t let him get a word in edgewise.
Ashley comes into Ben’s hospital room but cannot bring herself to tell Abby anything that Stitch said while they were trapped together in the Newman Tower.

Meanwhile, Stitch is still struggling to convince Ashley that he loves her while Ashley is adamant that the moment they shared was not real. Then Abby breezes into Ben’s hospital room with a stack of bridal magazines and wants to start planning the wedding of the decade right now.

Once again Stitch cannot get Abby to be quiet long enough to reveal that it’s really Ashley he loves. Dr. Rayburn gives up and tells Abby everything is going to be wonderful.

Who will be the one to break it to Abby that Stitch is in love with Ashley? Stitch may be stable for now but what if he takes a turn for the worse and dies? Will the secret die with him? Or will Ben and Abby make it all the way to the altar before the truth comes out?

What do you think “Y&R” fans? How do you think Abby will find out about her fiancé and her mother? Will Abby catch Stitch telling Ashley he loves her? Let us know in the comments section below and come back to CDL “The Young and the Restless” spoilers, rumors and gossip.