BY Cheri Magistro on August 25, 2015 | Comments: one comment
Related : Soap Opera, Spoiler, Television, The Young and the Restless 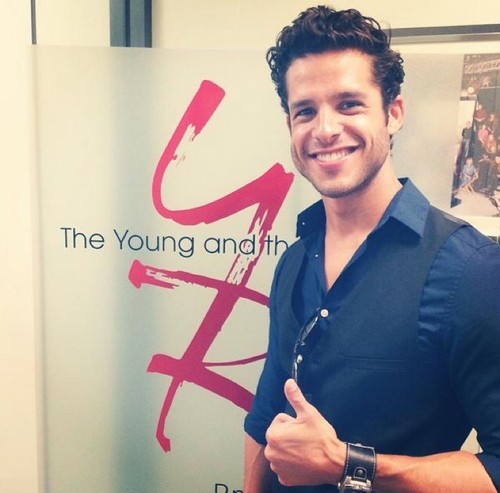 The Young and the Restless spoilers are heating up as another hunky Latino male character is cast to join the hottest men on daytime TV. Miles Gaston Villanueva is cast to portray the good looking, but ever so slick Luca Santori. He is another ex lover and boyfriend of Marisa Sierras [Sofia Pernas]. According to the latest Y&R spoilers, Luca comes on September 16 to stake his claim back on his woman as he has heard Marisa has started a new comfy life for herself living in Genoa City.

Luca wants Marisa to share her new wealthy lifestyle with him so he could live on easy street and enjoy all its benefits. Luca thinks that Marisa being connected to the Newman family through Noah [Robert Adamson] definitely must have its perks! According to additional Young and the Restless rumors, it’s Mariah Copeland [Camryn Grimes] who falls hard and fast as she first lays her eyes on this gorgeous hot newcomer!

We are also hearing, as soon as Luca realizes his ‘crush’ has a connection to the Newman’s and their wealth, he decides it’s much easier for him to hook up with her than get his beautiful Marisa back. I know you’re thinking, where does this leave Kevin Fisher [Greg Rikaart]. Unfortunately, looking in from the outside!

CDL hears more unsettling Y&R teasers that Kevin tries to downplay Mariah’s new love interest and acts like everything is cool. All is good as long as Mariah is happy, but the sleuth in Kevin just can’t stop! Luca is giving Kevin a very bad vibe as he tries to determine the interloper’s real attentions towards Mariah. The usually sharp gal who never misses a con is so much in love with Luca she is blinded to his gold-digging ways by his good looks and charm.

Mariah can’t see much past her infatuation with Luca. Will Kevin be able to dig up dirt on this new guy and prove to Mariah he’s not who he pretends to be? Or will Mariah take the plunge head first and dive into relationship with someone only looking for money and not love? Keep tuning in everyday to The Young and the Restless to see if Kevin can save his adorable sidekick before she gets herself stuck too deeply in Luca’s web of woo. Y&R Updates, news and spoilers are always changing. Make sure to check with CDL to keep up with the latest developments on your favorite soap.