BY Sean O'Brien on November 10, 2015 | Comments: one comment
Related : Soap Opera, Spoiler, Television, The Young and the Restless 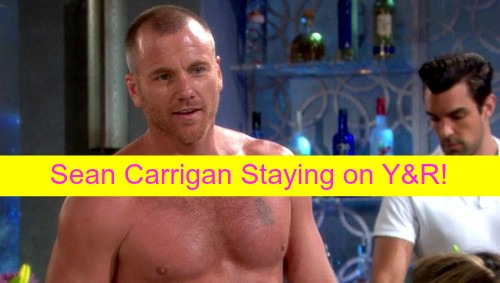 When ‘The Young And The Restless’ (Y&R) spoilers hit the internet teasing that Sean Carrigan was leaving the CBS soap and his character Dr. Ben “Stitch” Rayburn was going to be killed off – ‘Y&R’ fans were devastated.

It had been a bumpy ride, but Stitch was really starting to grow on viewers, and they were becoming genuinely interested in his storylines. ‘The Young And The Restless’ rumors indicated that Stitch would be killed off during November Sweeps, and that he would be one of four casualties during the Gala Fire on Halloween.

On Tuesday November 10, Sean Carrigan took to Twitter to let ‘Y&R’ fans know that the rumors were false – and Stitch was NOT exiting Genoa City any time soon.

Carrigan tweeted, “Hey everybody… Happy to say… Stitch survives and is staying in Genoa City for a while.” It’s not too often that casting rumors of that size turn out to be wrong, but we are thrilled that Sean Carrigan is not leaving ‘The Young And The Restless.’ However, Stitch did say “a while,” which is sort of vague. By “a while,” does he mean a few more weeks? Or does he have a contract for a year or two more on the CBS soap opera?

‘The Young And The Restless’ spoilers were teasing (courtesy of Chuck Pratt Jr.) that a popular male contract character on ‘Y&R’ would be killed off during the month of November. If Sean Carrigan survives the fire at the Gala, which he just announced he would, does that mean that there is still another main male character that is going to be killed off – or was Pratt simply marketing sweeps week?

What do you think ‘Y&R’ fans? How long will Sean Carrigan be sticking around as Stitch on the CBS soap? Since Stich survives the fire this month – does that mean that a different character is set to be killed off? Let us know what you think in the comments below and don’t forget to check CDL for all of your ‘The Young And The Restless’ spoilers and news!