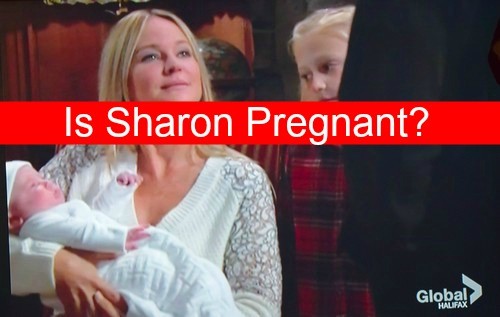 This would blow up the lie that Sharon gave birth to Sully. Since Sharon supposedly had baby Sully within the last few weeks, no way can she be both preggers and have given birth. The two incidents just don’t line up. With Sharon having a queasy moment recently, showrunners hinted at a pregnancy.

Since Sharon was in Fairview for weeks, that means she could have been impregnated by Dylan McAvoy (Steve Burton) prior to checking herself in there – or as soon as she was released. Even though Sharon had a miscarriage before she checked in, she could have gotten pregnant soon after.

Sharon may have entered Fairview pregnant and Dr Anderson never realized it because she was too busy doping Sharon to the gills and stealing baby Christian from Nick and Sage Newman (Kelly Sullivan).

Alternately, Sharon could have gotten pregnant immediately after coming home from Fairview. Either way, the timelines don’t fit with Sully’s birth. If Sharon just had a baby, she would not be able to get pregnant a week later and if she was pregnant before, the birth wouldn’t be feasible.

Once Sharon realizes she may be pregnant and goes to see her OB/GYN, that doctor will be able to tell immediately that Sharon has not given birth recently and the medical history doesn’t fit. There would be no physical evidence of a recent birth plus the timing of birth and pregnancy will overlap.

This will all be laid out for Sharon, but what will she do then? She will want to keep Sully but may realize he can’t be hers. Will Sharon figure out that he may be Christian? Sharon’s not a mean-spirited person, but she will not want to give Sully back.

Will Sharon keep the pregnancy secret and try to play it off? Will Sharon confront Dr Anderson after she finds out she’s pregnant and demand to know what’s up? If Dr A discovers that Sharon hasn’t told anyone else about the pregnancy, there’s no telling what she would do.

Dr A may drug Sharon and recommit her, try to hurt the baby Sharon is carrying, or any other number of horrible scenarios. The last thing Dr Anderson wants is for Nick to get his son back – although if she realized Christian was really Adam Newman’s (Justin Hartley), she might not mind the reveal.

But Dr Anderson is acting on imperfect information since she doesn’t know about Adam and Sage’s one-nighter. What we do know is that Dr Anderson is hell-bent on annihilating Nick for what he did to her back in high school and Sharon being pregnant would complicate her plans.

Dr Anderson may escalate the next phase of her revenge because of the pregnancy – but more likely she will try and remove the obstacle that blocks her way. Would Dr Anderson deliberately cause Sharon to miscarry this new pregnancy?

How horrible would it be for Sharon to lose one baby to accidental miscarriage, then another to Dr Anderson’s evil plan, and then down the road also have to give up Sully? Sharon may legitimately need some psychiatric care after all this unfolds – but from a decent shrink, not the evil Dr A…

What do you think YR fans? Is Sharon pregnant and will Dr Anderson hurt her if she finds out she’s carrying a baby that will interfere with her revenge? Could Sharon’s life or baby’s life be in danger soon? How far will Dr Anderson go?

Share your thoughts in the comments below then come back to CDL for more “The Young and The Restless” spoilers and news.