BY Heather Hughes on December 18, 2015 | Comments: one comment
Related : Soap Opera, Spoiler, Television, The Young and the Restless 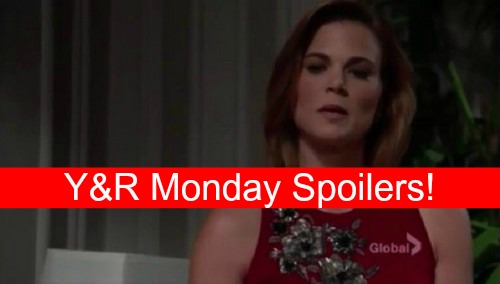 “The Young and the Restless” spoilers for Monday, December 21, tease that new plots and schemes threaten to upend what little tranquillity exists for Genoa City’s denizens. Gwen (Nadine Nicole) will have a new demand for Neil (Kristoff St. John). Gwen hasn’t been around much lately, but she’ll soon be back to cause some trouble.

It’s not clear what Gwen wants, but she’ll let Neil know that she means business.

In Monday’s preview video, Gwen reminds Neil that she’s one of the few people who knows what happened at the boathouse. Neil owes Gwen for her silence. If Neil doesn’t come through, Gwen could expose his role in Hilary’s (Mishael Morgan) kidnapping.

Neil has already been blackmailed by Dr. Neville (Michael E. Knight) and it sounds like he’ll have to keep Gwen placated as well.

Speaking of Dr. Neville, it appears his new partnership with Ashley (Eileen Davidson) will raise a couple of eyebrows. In Friday’s Y&R episode, Ashley announces her desire to team up with Dr. Neville on his new research project.

By Monday, Jack (Peter Bergman) will get updates on Ashley’s plans and he won’t be so sure it’s good news.

Jack will look puzzled as he asks about Ashley’s new business venture with the man who was hiding Hilary. Dr. Neville will pipe up that he wasn’t hiding Hilary; he was saving her. This peculiar doc’s motives seem to be a little muddled.

Dr. Neville wants to help people, but he undoubtedly wants his brilliance on display, too. Ashley may have difficulty handling Dr. Neville’s eccentric personality.

Other “Young and the Restless” spoilers reveal that Phyllis (Gina Tognoni) will reach out to Billy (Burgess Jenkins). The preview video shows Billy waking up to find Phyllis standing in front of him.

Billy will ask why she’s there and Phyllis will reply, “Redemption.” Will Phyllis help Billy out of his hole or will she just help him dig a deeper one? Stick with the CBS soap to see what Phyllis is up to this time.