The Young and the Restless (YR) Spoilers: Stitch and Abby New Year’s Wedding Disaster – What Happens? 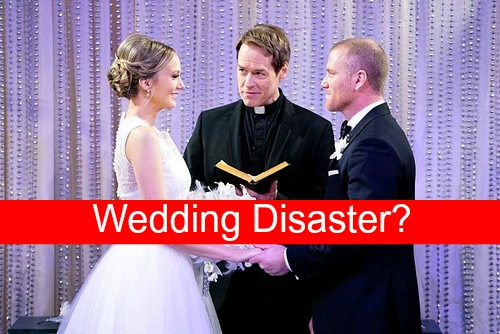 “The Young and The Restless” (Y&R) spoilers indicate that New Year’s will see a wedding between sexy doc Stitch Rayburn (Sean Carrigan) and Abby Newman (Melissa Ordway). But getting down the aisle will not be without drama, cold feet, second thoughts and temptation.

Here’s a glimpse at what this could bring. Stitch has feelings for both Abby and her mom Ashley Abbot (Eileen Davidson) but he knows that the appropriate thing to do is to go through with his vows to Abby, but that doesn’t mean last-minute temptation is not on the menu.

Y&R spoilers indicate that Ashley will come to speak to Stitch right before the nuptials begin and this could give him some second thoughts about wedding her daughter. This may be further complicated if Ashley reveals her illness, but it looks like she may keep that secret a bit longer.

But Stitch isn’t the only one wondering if Ashley is a roadblock to the wedding. Abby reconsiders whether Ashley has pushed her too fast on this wedding and if they shouldn’t slow up and reconsider things. Abby will finally decide to push aside her qualms and do the deed.

After all, Abby is already in the white dress and the family is all there, so why not? We do know that both Abby and Stitch will decide that the wedding is a go and they’ll walk down the aisle in front of friends and family – including Traci Abbott (Beth Maitland) who is back in town for the nuptials.

Victor Newman (Eric Braeden) will attend with Nikki Newman (Melody Thomas Scott) with no idea that his obsession with reviving Newman to its former glory is putting such a strain on their relationship that she’ll soon turn to another man.

But just because Stich and Abby say their “I do’s” does not mean they won’t face trouble in the New Year. Advanced spoilers for “The Young and The Restless” indicate there are challenges ahead for the newlyweds that could yet split them apart.

Chief among these concerns is Ashley’s looming health crisis. If Stitch thinks Ashley is dying, will he go back to the mindset he had in the blaze at Newman Towers and admit he still loves her? Could he throw away his new marriage to spend Ashley’s last days with her?

Will Ashley soon turn to Dr Simon Neville (Michael E Knight) as a romantic partner while he helps treat her brain disorder? And if Ashley does take comfort in the oddball scientist, could that spark jealousy in Stitch that would make Abby suspect he still has lingering feelings for her mother?

There’s far more to play out in the Ashley-Stitch-Abby love triangle despite the upcoming walk down the aisle. Let’s just hope Abby doesn’t throw the bouquet to her mom – that could get awkward fast… Check back with CDL often for more “The Young and The Restless” spoilers and news – every day all week long.