The Young and the Restless (Y&R) Spoilers: Traci Back in Town – Cane and Lily Under Mistletoe – Abbott Cabin Action 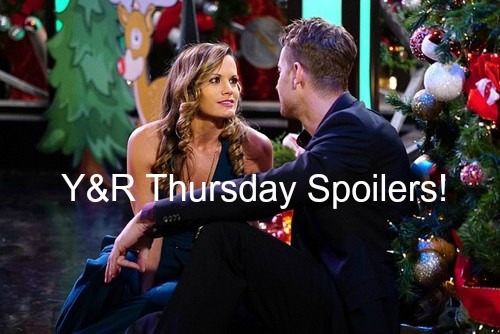 “The Young and the Restless” spoilers for Thursday, December 24, reveal that Cane (Daniel Goddard) and Lily (Christel Khalil) will get caught in an awkward situation. Y&R’s preview video shows Cane and Lily’s kids pointing out that they’re standing under the mistletoe.

When Lily wonders how it got there, Neil (Kristoff St. John) will reply that it’s magic. It sounds like Neil knows Cane and Lily still have a chance to make their relationship work. They just need a little nudge to help them realize that.

Meanwhile, Billy (Burgess Jenkins) will take matter into his own hands as he fights for his love. Victoria (Amelia Heinle) has been concerned about Billy’s drinking and constant outbursts. Billy can’t be a good father when he’s like this.

However, Billy’s chat with Jack (Peter Bergman) seemed to improve his mindset. Now that Billy has seen the light, he’s determined to right his wrongs. That means making some new promises to Victoria and showing her he can follow through on them.

Billy will let Victoria know that he’s going to do whatever it takes to win her back. Billy plans on being a better man, but will Victoria be receptive to his attitude adjustment? We’ll have to wait and see, but they’ll likely reconcile before long. Billy and Victoria always end up together eventually.

Other “Young and the Restless” spoilers tease that Jack and Phyllis (Gina Tognoni) will greet an assortment of Abbotts at the cabin. It looks like everyone will gather for a special holiday celebration.

Jack and Phyllis probably would’ve enjoyed being alone just as much, but they’ll still welcome the bunch with open arms. The more, the merrier. In fact, Traci (Beth Maitland) will arrive in time to join the festivities. Stick with “The Young and the Restless” for updates on the Christmas fun.

So Y&R fans, what do you think about the news that Cane and Lily will get caught underneath the mistletoe? Will they follow tradition and share a kiss? Will Victoria give Billy another chance to prove he’s changed?

Will the Abbotts have a merry Christmas this year? Let us know what you think in the comments below and don’t forget to check CDL often for the latest “Young and the Restless” spoilers, updates and news.