The Young and the Restless Spoilers: Abby and Stitch Make Love – Guilt and Consequences Follow? 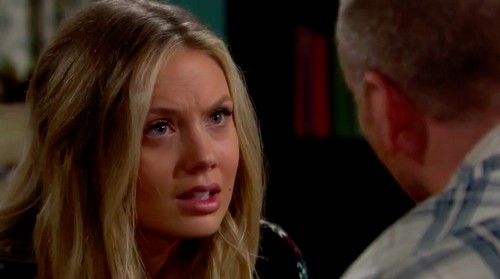 The Young and the Restless Spoilers are set to reveal more juicy gossip rumors concerning two of Genoa City’s hottest pairs. The dashing bodyguard watching over his girlfriend’s gorgeous little sister is about to push his duties way over the top according to updates circulating the interweb. New Y&R rumors are swirling that after weeks of constantly flirting with each other, Ben ‘Stitch’ Russell [Sean Carrigan] and Abby Newman [Melissa Ordway] take their newly found friendship up quite a few notches.

The dynamic duo are seen on The Young and the Restless as not being able to control their feelings of lust for each other anymore. The latest Young and the Restless rumors are reporting Stitch and Abby finally give in to each other and hook up in an evening filled with passionate love making. Of course, afterwards Abby feels extremely guilty that she was intimate with her sister Victoria’s [Ameila Heinie] boyfriend.

Anyone else think the once charming solider and hunky doctor has turned a creepy dark corner? First Stitch is with Victoria, than Ashley Abbott [Eileen Davidson] and now Abby. We can only wonder who Stitch will get romantic with next. Maybe Victoria’s mother Nikki Newman [Melody Thomas Scott]? Remember to check CDL where we have daily updates and spoilers on the Young and the Restless and all your other favorite soap operas.

Enjoy The Young and the Restless promo preview video for the week of April 13, 2015 below!