BY Heather Hughes on April 1, 2015 | Comments: one comment
Related : Soap Opera, Spoiler, Television, The Young and the Restless 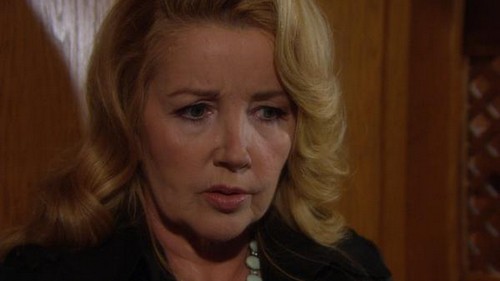 “The Young and the Restless” (Y&R) spoilers for Wednesday, April 1, hint that several Genoa City residents will struggle to keep secrets. Chelsea (Melissa Claire Egan) will question Billy (Burgess Jenkins) about his feelings for Victoria (Amelia Heinle) and an argument will ensue. Billy will insist that he was just comforting Victoria like Gabriel/Adam (Justin Hartley) comforted Chelsea. Billy will take a few jabs about how Chelsea’s hung up on Adam and he’ll admit that he wanted to kiss Victoria. However, Billy and Chelsea will share a smooch of their own after Billy says nothing happened and he’s in love with Chelsea now.

At Crimson Lights, Jack (Peter Bergman) and Ashley (Eileen Davidson) will discuss Victor’s strange behavior involving Jabot. They won’t know what Victor (Eric Braeden) is up to just yet, but Ashley will say she intends on fighting Victor with Jack. Of course, Victor seems convinced that Ashley will soon join the dark side so we’ll have to see how long Ashley will hold out. Ashley will get a phone call informing her that Victor is at Jabot and she’ll leave with Jack to take care of it.

Meanwhile, Gabriel/Adam will tell Victor that Jack has no intention of selling Jabot. Victor will question who he is and Gabe will say he’s a friend of Nick’s (Joshua Morrow) from boarding school. Ashley and Jack will show up and accuse Victor of organizing the security breach. Victor will tell them that his company’s servers were hacked as well and he thinks they should team up. Gabe will believe that Victor is lying and Ashley will escort him out of the building. Once they’re alone, Jack will shout at Adam for trying to challenge Victor like that and risk revealing his true identity. When Billy arrives, Jack will indicate that they all need to band together to go up against Victor.

Other “Young and the Restless” spoilers tease that Stitch (Sean Carrigan) will tell Abby (Melissa Ordway) he’s taking a trip to get Kelly’s (Cady McClain) ashes. Abby will offer to go with Stitch, but he’ll say that it’s something he needs to do on his own. Victoria will pop in and Stitch will tell her about his plans. Stitch will say he doesn’t want Victoria to come with him since Kelly already put her through so much. Victoria will suggest that Stitch should take Abby along. The rumors say Stitch and Abby will end up sleeping together soon so Victoria could regret pushing the two of them together.

Kevin (Greg Rikaart) will have news that he found some surveillance footage of Jack on Austin’s (Matthew Atkinson) laptop. Unfortunately, the quality is poor. However, the video was shot in a park and there’s a chance that a nearby surveillance camera also recorded what went down. Kevin and Courtney (Kelli Goss) will go to the police station and try to hack into the system to retrieve the footage.

An alarm will go off and Paul (Doug Davidson) will catch Kevin in the act. Kevin won’t be able to give Paul a good explanation so Paul will be forced to suspend him. While Kevin’s busy getting in hot water, Kyle (Lachlan Buchanan) and Summer (Hunter King) will be busy indulging in a little make-out session. Kyle will confess that he wants Summer back in his life and Summer will say that she trusts him.

Nikki (Melody Thomas Scott) will go to Paul for help figuring out Victor’s scheme, but Paul will refuse to go behind Christine’s (Laralee Bell) back again. Paul will tell Nikki that Christine can’t have any more children and he doesn’t want to get involved in whatever Nikki needs. Later, Nikki will confront Victor with the fingerprints she found at the confessional. Victor will say that the fingerprints aren’t about bringing down Jack; they’re about saving Victor’s company. Nikki will seem satisfied for the time being and leave. Once alone, Victor will call his mysterious partner and indicate that they need a new spot to meet at. Stick with CDL for Y&R updates as Victor’s plan enters its next phase.