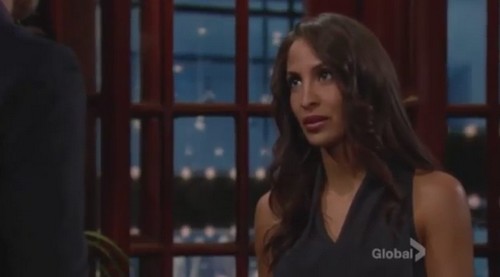 “The Young and the Restless” spoilers for Friday, July 17, tease that Abby (Melissa Ordway) will meet with some clients and close a big deal. They’ll celebrate with some bubbly and Abby will have a little too much to drink. An executive will offer Abby a ride and she’ll take him up on it. Meanwhile, Devon (Bryton James) and Hilary (Mishael Morgan) will talk about their upcoming wedding. They’ll joke around about their small ceremony. Nearby, Lily (Christel Khalil) will notice Joe’s (Scott Elrod) black eye and ask if it was Cane’s (Daniel Goddard) doing.

Cane will arrive and indicate that Joe deserved much worse than his shiner. Hilary and Devon will come in and try to break things up. Devon will hint that Cane might want to give Lily another chance, but it’s no use. Things are going downhill fast. Later, Michael (Christian LeBlanc) will also try to push Lily and Cane toward reconciliation. However, Cane will suggest that Lily might have been sleeping around before her one-night stand with Joe. Lily will slap Cane and declare that she won’t let him take her kids away from her. Cane will snap back, “Watch me.”

Sage (Kelly Sullivan) will rush over to see Adam (Justin Hartley) at Newman-Enterprises. When Sage wants updates on Marisa (Sofia Pernas), Adam will assure her that he has the situation under control. Adam will also mention the fact that Sage’s baby will be taken care of no matter what. Whether the baby is Adam’s or Nick’s (Joshua Morrow), the child is a Newman. Once she leaves the office, Sage will finally get around to ordering a paternity test.

Other “Young and the Restless” spoilers reveal that Nikki (Melody Thomas Scott) will believe Gabriel (Justin Hartley) could be hiding Jack’s (Peter Bergman) gun at Chelsea’s (Melissa Claire Egan) penthouse. Phyllis (Gina Tognoni) will be skeptical of the idea. Ashley (Eileen Davidson) will decide to get to the bottom of things. Ashley will go to Chelsea’s and say she needs some sketches for an upcoming meeting. While Chelsea is out of the room, Ashley will snoop around and discover the gun in a cabinet. Chelsea will come back with the sketches and Ashley will tip off the cops after she leaves.

Later, the police will arrive with a warrant to search the premises. The officer Victor (Eric Braeden) bribed will find the gun and Chelsea will wonder what’s going on. However, Adam will insist that he’s being framed. Paul (Doug Davidson) will let Forensics take a look at the gun and they’ll determine that Jack’s fingerprints are on indeed on it. Phyllis will ask Jack about the two guns and plead with him to communicate with her again. Jack will oblige and use hand squeezes to let Phyllis know that he wasn’t armed. Phyllis will realize that Victor is lying and can’t be trusted.

On the patio at Crimson Lights, Avery (Jessica Collins) will tell a news reporter her story. Avery will get teary as she discusses the painful experience she’s been through and how she tried to take the law into her own hands. Avery will add that she’s taking a leave of absence. When the interview is over, Joe will wonder why Avery was willing to speak with the reporter. Avery will say this was about showing she still has some self-respect. Joe will ask Avery what’s happens now and she’ll reveal that she’s leaving Genoa City. Avery’s last scenes are coming up soon. Y&R rumors hint that you’ll need your tissues. Stick with the CBS soap to watch Avery say her final goodbyes.