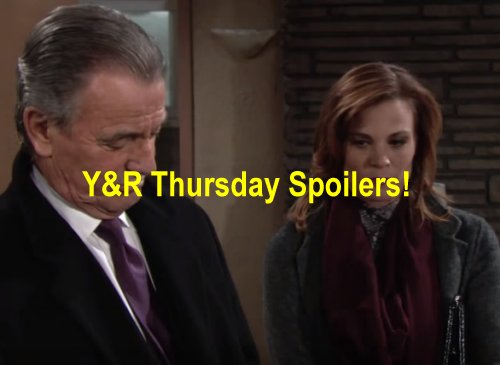 “The Young and the Restless” (Y&R) spoilers for Thursday, December 3, tease that Sage (Kelly Sullivan) and Nick (Joshua Morrow) will have to handle another major blow.

Sage will see an invitation to the christening of Sharon’s (Sharon Case) baby, which could be tough to swallow. Dylan (Steve Burton) and Sharon are thrilled to have Sully in their lives, but it’s hard for to Nick and Sage to share in that joy.

Their lives have been consumed by sadness since Christian passed away. Fortunately, it seems Sage and Nick are slowly beginning to heal. They’ll still have pain in the coming weeks, but they’ll likely learn to cope.

Of course, we have to remember that Nick and Sage’s child is actually alive and well. Sharon and Dylan are the ones who will be dealing with a heartbreaking loss down the road.

The baby will undoubtedly be returned to his true parents eventually. As an added layer of angst, Adam is Christian’s real father. It appears Nick won’t be getting off of this emotional roller coaster anytime soon.

Meanwhile, Luca (Miles Gaston Villanueva) will not be pleased by how things have turned out with Marisa (Sofia Pernas). Luca planned on making Marisa fall back in love with him during their month-long commitment.

Instead, Marisa hooked up with Noah (Robert Adamson) behind Luca’s back. “The Young and the Restless” spoilers say Luca will announce that the thirty days are up and Marisa didn’t keep her end of the bargain.

It sounds like Luca won’t be giving Marisa updates on her daughter’s location. Luckily, Noah can continue to work on that for his love. Elsewhere, Ashley (Eileen Davidson) will try to get through to Phyllis (Gina Tognoni).

Billy is already seeing the consequences of his deception and Phyllis could be next. Will Phyllis reconsider or will her desire for revenge prove too strong? Stick with the CBS soap to see if Phyllis and Billy’s scheme will lead to more bad news.