The Young and the Restless (Y&R) Spoilers: Newman Halloween Party Disaster Kills 4 – Who Set The Fire? 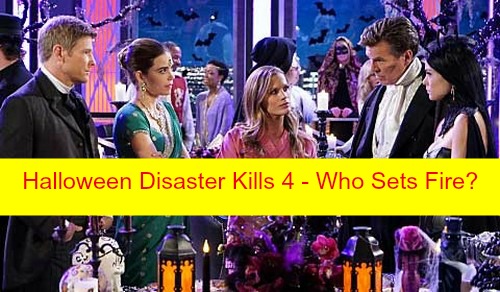 “The Young and the Restless” spoilers are in, and boy are they juicy. The highly anticipated November sweeps previews were dropped today, and take it from CDL – sweep month is going to be one for the books. As CDL reported a few weeks ago, there will be a HUGE explosion – all leading up to a front-burner and leading man saving the day and redeeming his often controversial character.

It all starts on October 30; Phyllis (Gina Tognoni) and Nikki (Melody Thomas Scott) host a Newman costume gala in the recently re-opened elegant restaurant on the top floor of Newman Enterprise’s building. A mysterious person sets fire to the building, and it creates a HUGE panic.

When the fire cannot be extinguished easily, Victor (Eric Braeden) worries that his whole building may go up in smoke- exploding and taking out everyone he loves in the process. As the building continues to burn, Victor must put his differences aside and work with his business rival, Jack (Peter Bergman) and son, Adam (Justin Hartley).

It all is leading up to an event that was rumored to take up to four lives, one of which will be a contract front-burner character. At the moment, there is not a shortage of fruit loops and crazy women in Genoa City. Chloe (Elizabeth Hendrickson), Patty (Stacy Haiduk), Ian Ward (Ray Wise), and Dr. Anderson (Elizabeth Bugosh) could have a motive behind retaliating against the Newman’s.

Chloe arrived last week with one clear agenda – to kill Adam Newman for taking her precious daughter Delia from her two years ago. She was so angry with him; she couldn’t see straight; she pulled out a gun, pointed it to his chest and was determined to see him suffer. Adam’s wife, Chelsea (Melissa Claire Egan) stepped in front of the gun and refused to move – told her she’d have to shoot her too.

Chloe saw that maybe she was acting impulsively, retracting the gun. She told Billy (Burgess Jenkins) that she was not done with her revenge against the Newman’s. Billy tried to talk her out behaving in a rash way, but it fell on deaf ears. As CDL was first to report, Chloe is hiding having an infant – a daughter – which will come out at some point in November sweeps, the spoiler’s state.

Patty has a way with embracing her nutty behavior, rationalizing that her end game justifies all the hurt it often causes. She never means to hurt anyone; however, she has a habit of letting the chips fall with loose ends. Those loose ends usually end up causing harm with Patty taking the fall. The person that often is hurt most through her episodes is Paul Williams (Doug Davidson).

It seems unlikely that Patty would have any ill feelings towards the Newman’s; however, she COULD feel jealousy that Phyllis remarried Jack. Patty isn’t capable of going out of her way to hurt others- so she likely is not the culprit.

Ian Ward is the devil in disguise. He is the master of getting the best of Victor and masterminded the Paragon Project with Adam. He teamed up with Adam Newman – in an effort to take Victor Newman down – once and for all. A few weeks ago, Paul arrested him and took him away to prison. Fans have speculated that it wasn’t the last of Ian Ward’s mayhem. Is it possible that the explosion is another devious plan orchestrated by none other than Ian Ward?

Dr. Anderson is a relatively new character, with very little known about her background. It is speculated that she could be Sandra Allen – the high school girl who was injured at Nick’s party on the Newman ranch. Her family was paid off by Victor, and she wasn’t seen or heard of since. The crazy doctor has a secret, and her behavior has definitely been off. She is treating Sharon. Is it possible she could be thirsty for revenge against the Newman’s? Could she be angry with Sharon- if she believes Sharon saw her fall and did nothing to help her?

For quite some time, the Y&R November sweeps predicted that four people will die – one being presumably Stitch (Sean Carrigan) who can’t seem to get his contract renewed despite being a remarkably charismatic and talented actor. The spoilers revealed that Stitch and Abby (Melissa Ordway) would get engaged, only to face the Newman disaster and one of them may not make it out alive. Don’t forget to come back for more juicy “The Young and the Restless” spoilers, rumors, and updates!