The Young and the Restless (Y&R) Spoilers: Halloween Gala – Killing Fire Spreads, Will Adam Save the Day or Go Down in Flames? 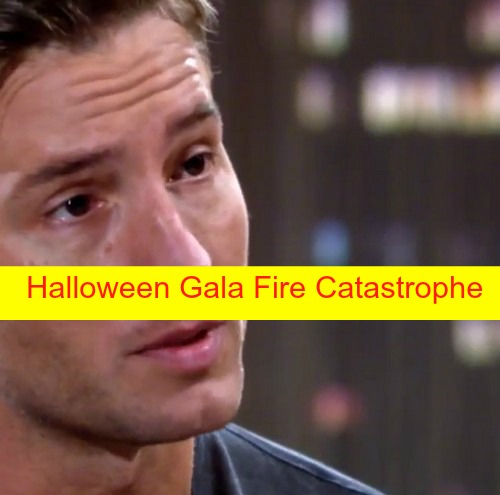 “The Young and the Restless” spoilers tease that plenty of excitement is headed your way as Halloween rapidly approaches and with it comes disaster in Genoa City! It looks like some great tricks and treats are in the works. First, we’ll see a celebration at Top of the Tower, the newly-reopened restaurant at Newman Enterprises.

Nikki (Melody Thomas Scott) and Phyllis (Gina Tognoni) will be in charge of hosting a frighteningly fabulous Halloween gala. Of course, no party in Genoa City goes off without a hitch. It seems a shadowy figure will be lurking at the shindig and he or she will eventually start a huge fire. It’s a little smoky drama to go with the spooky fun.

Once the flames are burning, the action will really heat up. “The Young and the Restless” spoilers reveal that Victor (Eric Braeden) and Jack (Peter Bergman) will have to put aside their differences to get out of this mess. These two are always forced to come together during catastrophes. Enemies can become allies in times of crisis. Naturally, the war will be back on five minutes later, but at least they’ll probably live to tell the tale.

However, this fire could ignite a far different feud when sparks begin to fly. “The Young and the Restless” spoilers indicate that Ashley (Eileen Davidson) will be drawn to Stitch (Sean Carrigan) during the chaos. True feelings tend to come out when people fear the end is near. Perhaps Ashley will confess her love for Stitch if she believes they may only have moments left. If they survive, the news will undoubtedly present a problem for Stitch’s relationship with Abby (Melissa Ordway), which has recently been on the mend.

Y&R rumors hint that Stitch may be killed off, but that could be tied to a separate storyline coming down the road. An explosion should shake things up once November sweeps are in full swing. In the meantime, which of the fair-haired damsels will Stitch choose? Decisions, decisions… That’s quite a dilemma for the amorous doctor.

Finally, we can’t forget about sweltering Adam (Justin Hartley) in the midst of the pandemonium. Adam has a lot on the line right now, but he’ll risk everything in the imminent blaze. Maybe Adam will make some updates to his current image and become a Halloween hero. Will Adam’s bravery and sacrifice help him win back his family? It’s tough to say, but these can’t-miss episodes should be scary good! Stick with the CBS soap to see if Adam will save the day or go down in flames.

So Y&R fans, what do you think about all the drama happening this Halloween and beyond? Do you believe this will be an exciting kickoff to November sweeps? Voice your opinion in the comments below and don’t forget to check CDL often for the latest “Young and the Restless” spoilers, rumors, updates and news.