BY Chrissie Williams on December 11, 2015 | Comments: one comment
Related : Soap Opera, Spoiler, Television, The Young and the Restless 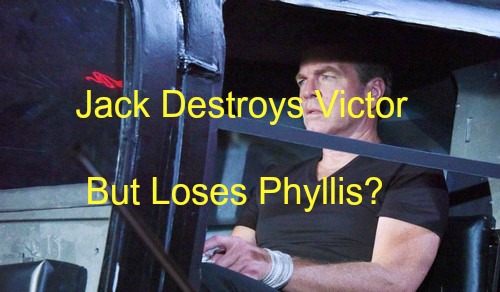 “The Young and the Restless” spoilers tease that Jack Abbott [Peter Bergman] is determined to make sure that Victor Newman [Eric Braeden] is brought to justice. The legal action Jack takes to ensure Victor pays for his criminal activity tears apart his relationship with Phyllis [Gina Tognoni], leading to a messy divorce.

If Jack exposes Victor and Marco Annicelli [Peter Bergman], will Phyllis end her marriage with Jack for publicly humiliating her?

“The Young and the Restless” December 14-18 spoilers indicate that Jack decides enough is enough, and he decides to take legal action against Victor. Jack takes drastic measures to make sure Victor can never hurt anyone like he hurt him and Phyllis with Marco. Jack consults Michael Baldwin [Christian LeBlanc] and asks him to help him expose Victor and all his recent shenanigans.

As Jack retells the story about how Victor was involved in Marco’s arrival into Genoa City and Kelly Andrew’s [Cady McClain] death, Michael looked horrified at the details Jack told him. He knew Victor was capable of heinous acts, but this is bad, even for Victor.

Michael agrees to represent Jack [Jabot] in court against Victor [Newman Enterprises]; however, he warns Jack that it could [will] get ugly. Jack warns Michael he is prepared for the fight; Victor MUST pay this time. Jack realizes that he did nothing wrong when Kelly died.

It dawns on him that he was drugged when she died, and he never did anything to her. The truth enrages Jack, and he becomes more determined to nail Victor in court. Michael believes Victor will not be able to prove Jack did anything illegal that led to Kelly’s death.

When Phyllis learns about Jack’s plan to fight Victor by exposing Victor’s involvement with Marco, Phyllis unleashes at Jack. She is livid that he’d open her up to that type of scrutiny; Phyllis advises Jack that she will NOT allow him to tell the world about how she bedded Marco without knowing his identity for months.

Phyllis tells Jack, “You do this; you will place a target on my back. Everyone will look at me in town, and laugh.” Jack assures her that he will do his best to protect her from the press, but the truth has to come out. Jack, in no uncertain terms, told her that it had to be said, and if it ends his marriage, it is a risk he will take. Phyllis is left feeling betrayed by Jack and isn’t sure if she wants to stay in the marriage, anymore.

Phyllis turns to Billy Abbott [Burgess Jenkins], which proves to be one of the biggest mistakes of her life. Will Phyllis sleep with Billy when she learns that Jack plans to expose Victor? Will Billy brag about bedding Jack’s wife to him? Don’t forget to come back later for juicy “The Young and the Restless” spoilers, gossip, and updates!