BY Heather Hughes on December 10, 2015 | Comments: one comment
Related : Soap Opera, Spoiler, Television, The Young and the Restless 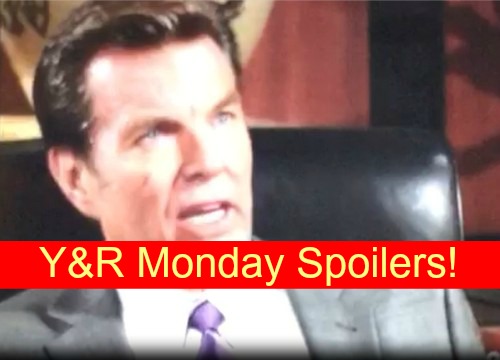 “The Young and the Restless” spoilers for Monday, December 14, tease that Victor (Eric Braeden) will be stuck in the middle of several conflicts. In Y&R’s preview video, Victor suggests that Stitch (Sean Carrigan) and Abby (Melissa Ordway) might want to postpone their wedding. Victor will think springtime would be better. Ashley (Eileen Davidson) will lash out at Victor once she hears his advice.

Ever since Stitch and Ashley declared their love for each other in the fire, things have been tense between them. It’s clear that Ashley is ready for Stitch and Abby to get this show on the road. Perhaps Ashley feels that she’ll be able to put her feelings for Stitch behind her if she can just get him to marry her daughter.

Ashley obviously wants to make sure this wedding happens ASAP. Unfortunately, Stitch will soon reveal his true feelings to Abby and that could mean bad news for their relationship.

Elsewhere, Jack (Peter Bergman) will seek Michael’s (Christian LeBlanc) help as he prepares to fight Victor. Michael will be shocked to learn about the Marco (Peter Bergman) fiasco, but he’ll fear that Jack could run into some trouble if he tries to retaliate.

However, Jack will believe he was drugged when he killed Kelly (Cady McClain). That could get Jack off the hook.

“The Young and the Restless” spoilers indicate that Jack will want to hold a press conference and expose all of Victor’s dirty deeds. Of course, Phyllis (Gina Tognoni) will have something to say about that idea. It would be humiliating for the whole world to find out how Phyllis was duped in the worst way possible.

This will undoubtedly cause big problems for Phyllis and Jack’s marriage. Will they be able to work through the drama? Stick with the CBS soap for updates on their attempt to resolve their issues.