‘The Young and the Restless’ Spoilers: Phyllis Catches Jack Cheating In Bed With Kelly – Which Crazy Woman Will He Choose? 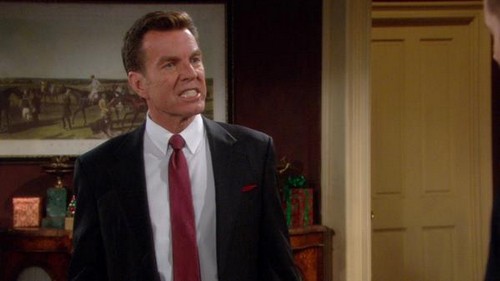 “The Young and the Restless” spoilers have been teasing an epic battle between Kelly Andrews and Phyllis – over Jack Abbott. When Phyllis was in a coma, Jack began a relationship with Kelly; however, when Phyllis shocked the world and woke up and returned to Genoa City, Jack dumped Kelly like a bad habit and got back together with Phyllis. The two women have been bickering on the CBS soap for weeks now over Jack, and according to new “The Young and the Restless” spoilers, the feud is only going to get crazier and both women are going to start playing even dirtier.

According to Y&R spoilers in the latest edition of CBS Soaps In Depth, Phyllis is going to catch Jack in bed with Kelly! The magazine explains, “When Jack gets a text from Phyllis suggesting that he met her at GCAC, he doesn’t even hesitate to follow her instructions that he crawl into bed and don a blindfold. But when his playmate plant a pucker on him, Jack immediately recognizes the lips as Kelly’s!” Of course, Phyllis just happens to walk in the room at that time and catch Jack in bed with his old flame.

“The Young and the Restless” spoilers tease that the upcoming storyline isn’t as simple as it seems – Kelly claims that she didn’t trick Jack in to bed with her, and she was just following instructions that he texted to her. So, according to Kelly – Phyllis set up the entire thing just to see if Jack would cheat on her. Of course, Phyllis vehemently denies Kelly’s allegations and insists Kelly is responsible for the scheme. It looks like Jack Abbott is stuck between a rock and a hard place – and is going to have to choose the lesser of two evils. At this point, both Kelly and Phyllis are acting certifiably crazy.

“The Young and the Restless” rumors have been floating around and teasing that before Jack chooses which woman he will be with her – one of them winds up seriously injuring the other and some Y&R fans even believe that Kelly Andrew will be murdered by Phyllis and killed off the CBS soap. What do you think, Y&R fans? Is Kelly as innocent as she is pretending to be or is she fighting just as dirty as Phyllis? Which woman do you think orchestrated the latest scheme? Let us know what you think in the comments below and don’t forget to check CDL tomorrow for more “The Young and the Restless” spoilers and news.