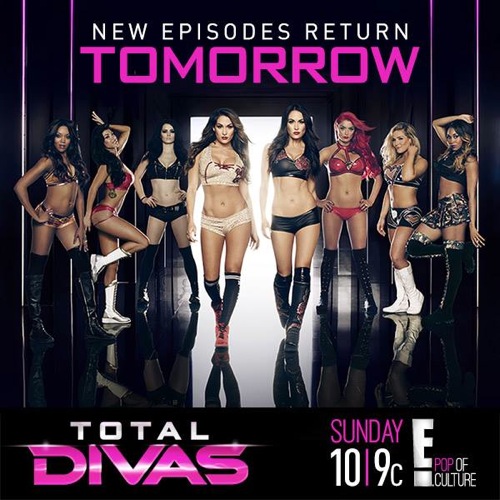 Tonight on E! the WWE’s Total Divas starring the Bella Twins and the rest of the Divas continues with an all new Sunday January 4, season 3 episode 11 winter premiere called, “Her Highness.” On tonight’s episode, the Bella family erupts when Nikki Bella discovers the truth about John Cena.

On the last episode before the winter break, Brie went behind John’s back and confronted Nikki leading to explosive consequences. Did you watch the last episode? If you missed it, we have a full and detailed recap, right here for you.

On tonight’s episode as per the E! synopsis, “the Bella family is in crisis mode after Nikki learns the truth about John; British wrestler Paige takes the Divas division by storm; and Nattie tries hard not to get caught in an illegal act.”

John and Nicole have broken up for what appears to be for the last time. And John was the one to call it quits.

He did so after talking to much of Nicole’s family and yet he left that part out when he spoke to Nicole. He simply told her that she go their separate ways seeing as they want two different things. Nicole has always wanted to get married and to have kids. And that’s just something John has never pictured for himself.

So calling it quits was for the best but Nicole doesn’t see it that way. Prior to the breakup, she was actually willing to give up on the whole getting married and having kids dream. It took her awhile to get there but that was something she was prepared to do in order to stay with John. So the breakup felt like it came out of left field.

She wanted to know what else she could have done meanwhile her family just keep trying to her that John wasn’t good for her. Even though he was gentlemanly enough to drive a wedge between them and Nicole.

Elsewhere, though, new girl Paige is causing quite a stir. Paige is fresh on the wrestling scene yet she’s still has somehow made a name for herself. And regardless of appearing to be a tad wild, Nattie wanted to give her the benefit of the doubt. So the two of them had hung out. Paige said she knew about a party and Nattie basically said what the hell.

However, the party was simply not Nattie scene. The other party guests were too much and someone had given her a pot brownie without forewarning her. So she later she ended up feeling dizzy and Paige had to help her home.

WWE has a very strict drug policy and they test their wrestlers every week. Hence the very second she was able, Nattie was trying to dilute herself before she find herself without a job.

And as for Nicole, her sister had felt so bad about breaking up her and John; Brianna had told her family they needed to come clean with Nicole. She told them they shouldn’t have interfered and they hadn’t agreed. Nicole’s mom and brother still felt like they did the right thing.

So, when the time came to talk to Nicole, the only person that seemed to be at all apologetic was Brianna. She told Nicole what they did and Nicole flipped out on all of them. She felt it wasn’t their place to John about her supposed feelings.

Then, once she was done screaming at her family, Nicole ran right back to John. She considers him to be the love of her life and she’s willing to do whatever it takes to keep him. Even if it means giving up on her dreams.

But Nattie is in a worse off position. After doing everything she could to dilute the one bite of a pot brownie – she found out there was going to be random drug testing at work. So rather than face the music – she tried to get into a car accident in hopes it would excuse her from peeing in a cup. Though Ariane was also in the car with her.

So technically there was an eyewitness when Nattie deliberately ran into a dumpster. And after she was told she couldn’t keep getting into accidents for several days – she finally decided to go face the music.

Nattie went into work and did her best to downplay what she did but Ariane wasn’t having it. She made Nattie come clean and once Paige heard about the lenthgs Nattie was willing to go to – she also decided to come clean.

It seems Nattie never ate a pot brownie. Paige just wanted her to lighten up so she mentioned drugs in order for them to have a good time. Then she kept quiet when she saw how freaked out Nattie was getting.

But that was still a betrayal so odds are Nattie is never going to forgive about keeping quiet for so long.

And Nicole isn’t going to forgive Brianna. When her storyline revealed she was going to betray her sister – she jumped on it with glee. Nicole has told Brianna that their relationship is professional only from now on.