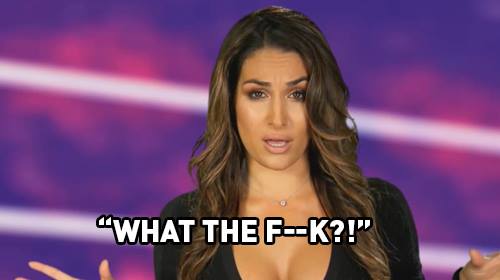 Tonight on E! the WWE’s Total Divas starring the Bella Twins and the rest of the Divas continues with an all new Sunday March 1, season 3 episode 18 called, “Model Behavior,” and we have your weekly recap below. On tonight’s episode, Ariane is embarrassed for her father to meet Vinnie’s family.

On the last episode Nattie renovated her mom’s house; Brie tries to help with Nicole’s out-of-control spending habits; and Eva Marie started to fear the worse for her dad’s health, and so she came up with a Vegas bucket list for him. Did you watch the last episode? If you missed it, we have a full and detailed recap right here for you.

On tonight’s episode as per the E! synopsis, “Ariane is embarrassed for her father to meet Vinnie’s family; Nattie struggles with TJ’s new career choice, finding it difficult to be supportive when he strips down with some hot models; and Paige feels the need to rebel when WWE tells her not to get a tattoo.”

Tonight’s episode of Total Divas kicks off at Bryan and Brie – she bought a home security system and she and Bryan sit down to record themselves barking like dogs to scare off burglars. They decide to both bark at the same time so that the burglars will think they have more than one dog.

Nattie and TJ head out to dinner together, she gives him a gift – a photo of them from back in the day when they first began wrestling. Nattie thanks TJ for helping him out with her parents even though their marriage wasn’t in a good place at the time. She cries that she loves him – and TJ tells her that she “still has him.”

Paige visits Mark Carrano and tells him that she wants to get a tattoo – either a sleeve or a chest piece in honor of her mother. Mark warns her that her body is a brand now, and he doesn’t think getting a tattoo is a good idea. He says he will run it past the creative department to see what they think about adding it to her character – Paige is excited because there is a small chance that they could say yes.

Ariane has lunch with some of the other divas. She confesses to the Bella Twins that Vinnie is pressuring her about his family meeting her family. Ariane says that her dad used to smoke crack and he is missing some of his teeth and he isn’t in the best of health – so she feels a little uncomfortable about how Vinnie’s family will feel about him.

Nicole gives her some advice and tells her to sit down with her family and tell them to be on the best behavior.

TJ and Nattie are hanging out in the hot tub together – they begin bickering about their last matches. TJ was upset that the audience kept chanting “Nattie’s Husband.” He wants to be his own person not be known as “Nattie’s Husband.” Nattie tells TJ that she wants him to be happy in whatever career he chooses – so he says that he has always wanted to do modeling. She takes some photos of him in the hot tub posing.

Ariane decides to drive out and see her dad – it has been a year since the last time she seen him. She brought Eva along for moral support, on the way there she fills Eva in on their family history. Ariane admits that she is a little embarrassed about her dad’s alcohol and drug abuse – even though he has turned his life around now. They finally arrive and Ariane’s father Forrest runs out to greet them, he gushes about how beautiful she and Eva look. They head inside and Ariane sits down with Forrest and her step-mom Liz and invites them to dinner. He admits to Ariane that the reason he hasn’t been out and about is because he feels ashamed of his teeth. She tells him that she is going to take him to the dentist and get his teeth fixed for him. Forrest agrees to go to the dinner after he gets his teeth fixed, Ariane warns him he can wear his “pimp outfit.”

Nattie is determined to support TJ in whatever he decides he wants to do – so she got him a meeting with a major modeling company. They head to the meeting and meet with a scout named David Todd, he decides to snap some photos of TJ right then and there to do a camera test.

Paige heads to work and Mark Carrano tracks her down – he tells her that the creative department has nixed her idea to get a tattoo. She can’t just change her body over night, they just came out with a new line of action figures of her and they don’t have the tattoo on them. Paige is furious – she thinks that it is her body and she should be allowed to change it however she likes.

Nattie and TJ head to meet with the model agency after TJ’s photo shoot – they tell him that they don’t think that he is “fashion model material” but they are going to books him some gigs as a fitness model and for sports companies. Nattie is thrilled when the model exec tells them that TJ is going to make some serious money.

Ariane takes her Dad shopping to buy him a suit and he whines that the suits aren’t his style. She takes him to the dentist office and the dentist breaks the news to Ariane that there is no way he can get his teeth fixed and new dentures made in a week. They head to dinner and Ariane makes her Dad put his dentures in even though they don’t fit and make him gag. While they are out to eat Vinnie takes Ariane’s Dad Forrest aside and tells him that he wants to propose to Ariane and wants his blessing. Forrest is thrilled and thanks Vinnie for being a part of his Ariane’s life and says that he will “be a good husband to his daughter” and it will be an honor to have him as a son-in-law.

After Nattie and TJ leave the modeling agency Nattie tells him that she feels uncomfortable about TJ modeling with other women – at the photo shoot the girl that was posing with him was putting her boobs all over him. TJ reassures Nattie that he wasn’t comfortable with it either – and he wishes that it was Nattie he was posing with. She is relieved that he feels the same way and he reassures her that he won’t be posing with anymore naked women.

At dinner Vinnie’s parents arrive and Ariane’s dad gives a toast. He announces that Ariane and Vinnie are getting married – everyone gets quiet, and it is super awkward. Vinnie hasn’t proposed yet to Ariane, and her dad has definitely jumped the gun on the toast. Vinnie smooths things over and explains to Ariane that he asks for her dad’s blessings for when he does propose. After dinner Ariane breaks down and cries and apologizes to her dad for trying to change the way that he looked – she hugs him and tells him how much she loves him.

Paige heads to the tattoo parlor even though Mark Carrano told her not to get a tattoo. Rosa and Alicia panic because they know that Paige is going to lose her job, they call Nattie for back up. Nattie tries to reason with her and tells her that if she thinks getting a tattoo is more important than her career in the WWE then she should go for it. Paige announces she is getting the tattoo anyway – and goes in to the room with the tattoo artist. Nattie, Rosa, and Alicia are devastated they think Paige is making the biggest mistake of her life. At the last minute Paige changes her mind and doesn’t get the huge chest piece she had picked out. She did get a tiny tattoo on her thumb though just to prove that it is her body and she can whatever she wants to it.