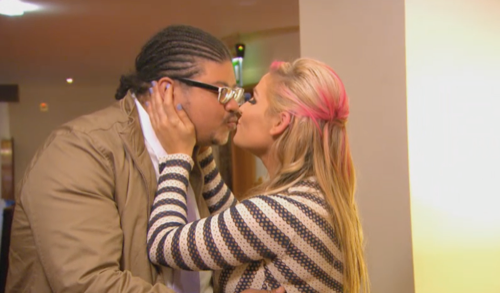 Tonight on E! the WWE’s Total Divas starring the Bella Twins and the rest of the Divas continues with an all new Tuesday August 4, season 4 episode 5 called, “Tea Mode.” We’ve got your recap down below! On tonight’s episodes, Alicia, anticipating that her ex-boyfriend may be single again soon, toys with the idea of confessing her love to him.

On the last episode Paige ditched Alicia for a new man; Nattie infuriated her husband with her unwillingness to say “no”; and Nikki confronted Bryan about not liking her. Did you watch the last episode? If you missed it, we have a full and detailed recap right here for you.

On tonight’s episodes per the E! synopsis “Alicia, anticipating that her ex-boyfriend may be single again soon, toys with the idea of confessing her love to him; Jonathan takes heat for Eva’s bruises; and Paige is offended by Nikki’s classy take on her home turf.”

The divas get ready to go on two separate European tours. They are separated into two teams and sent on different tours.

Paige is excited to show her team her homeland of England. However, she and Nikki are on the same team and she’s concerned about how Nikki will react to England. Nikki has a posh and prissy attitude and may stereotype England as being classier and more uptight than it really is. She’s afraid Nikki will try to do things there that no one even does.

Exes Wade and Alicia will be going on the same tour. Alicia still has feelings for Wade even though he has a girlfriend so she will have a hard time going on tour with him, she says in confessional.

Paige learns from Cameron and Natalya that Nicole used to be a farm girl who used to work at Hooters.

Eva is progressing in her training, and says in confessional that all of the work she has put in is going to show.

Emma and Natalya tell Alicia that Wade and his girlfriend are having issues. She sees this as an opportunity to try to repair what was broken between them.

Eva does a photo shoot covered in white paint and with red eyes. The paint covers up nasty bruises she got from hitting the mat. Before she is painted, she has a photo snapped of herself with arm bruises visible.

Nikki shows Paige a “tea cap” from England, and Paige sarcastically says she has one of those at home.
Nikki asks Paige if she doesn’t like tea. Paige says in confessional that she doesn’t want to sit around and drink tea and that’s for old people.

Nattie encourages Alicia to “clear her conscience” regarding Wade. Rosa, however, says she should move forward and not think about the past. Nattie says that she did though, and is still traumatized about the past.
Alicia says she doesn’t know if it’s worth telling Wade about her feelings because they dated so long ago and were younger and in different places in their lives. She says she always dates guys that are disposable. Nattie suggests that that may be why she has feelings for Wade, because he isn’t one of the disposable ones. Rosa suggests that once Alicia finds someone else, Wade will still be a part of her life but she won’t think of him as much.

Eva tells Jonathan that people on Instagram think he is beating her after she posts the photo shoot picture of her with the bruises.

She says that her fans know her occupation and that she’s training, and furthermore that she would beat his ass before he beat hers.

Nicole brings over gloves and hats for “tea time.” She, Brie and Paige pick hats to wear.

Paige says in confessional that she is so close to head butting a bitch right now. She says she doesn’t want to wear the hat and it sucks. She says she is in her hometown and if she wants to drink a pint she will rather than sit around and drink tea.

At tea, Nicole wants Paige to put her pinky up while drinking tea. Paige says tea time is more for the royals and not for commoners.

Brie says that fish and chips sounds good and when Paige suggests a place, Nicole ignores them. Paige then storms out and has their car take her to a fish and chips restaurant.

When the other two walk out onto the street, Nicole says she just wanted Paige to have the full experience. They get out on the street and realize that Paige took the car.

Eva and Jonathan go to a restaurant, and when Eva goes to the bathroom a woman stops her and asks her if her bruises were from abuse and offers her help. She goes back to the table and tells Jonathan about her. She says that from the corner of her eye she can feel the woman looking at her from her table.

Nicole pulls Paige aside and asks her about stealing the car, saying she feels like she is being distant and cold. Paige says she felt like that whole situation was pretentious and fake and made her wonder what was with this girl right now. She walks away, saying she’s just going to go be herself in a dive bar. “Enjoy your sandwiches and small pots of tea,” she says.

In the car leaving the restaurant, Eva is still disturbed by her encounter with the concerned woman. Jonathan says he doesn’t fault the woman because she was just trying to help and may have been through the same thing, but he doesn’t want her to be ashamed by her battle scars from her sport. He says if she really doesn’t like the photos, she should delete them, but if she does like them, he doesn’t want her to change her behavior for anyone else.

Nattie asks Alicia if she’s talked to Wade. She says they talked on the bus. Nattie reveals that she went up to Wade and told him Alicia wanted to talk to her. She says she wants her to resolve her issues. Alicia suggests texting him, and Cameron says they should just go to his hotel room.

Nicole and John Cena take Brie out to dinner to help her celebrate her one year anniversary with her husband who is far away.

Nicole complains about how Paige said she was being fake classy by setting up tea time. John says that he grew up on hand me downs and they agree that some people just don’t understand.

Nicole says in confessional that when she grew up she would have done anything to have tea time and just wanted to be glamorous.

Nattie goes up to the front desk of the hotel and pretends to be Wade’s sister in order to get his room number. She and Cameron then send Alicia to the end of the hall where his room is. She knocks on the door several times and then runs away.

She says in confessional that she just isn’t ready for this right now.

Nattie tells Alicia that she needs to get to the bottom of this and man up.

Paige feels bad about her fight with Nikki because they’re good friends. She asks Brie if she thinks Nikki is mad at her. She says it’s mostly royalty who does that kind of thing and she feels common. She says she was tired. Brie says Nikki gets a lot of heat for enjoying things like tea time and fancy dinners. Paige says everyone has things they like to do and she was freaked out and thought it was unlike her.

Brie says that they never had those kinds of things as a kid so that may be why she likes it.

She says when she smells horse manure and hears country music she feels at home, but it’s nice to experience a different culture and not feel at home.

Alicia, Rosa, Nattie and Cameron talk outside.  Rosa tells Alicia that talking to Wade in the states may be better because doing it while he’s away at tour sounds like a home-wrecking situation. “Why are you calling me a homewrecker?” Alicia says. Nattie says that Rosa is taking it too seriously. Rosa says that if her man was on tour and an ex knocked on his door she would be pissed.

Before the London show, Alicia spots Wade’s girlfriend Rachel backstage. Rachel is a nice girl and Alicia realizes she should get over Wade. She says in confessional that it was hard to get over Wade because he was her first love, but she is young and there are plenty of other guys in the world she is compatible with.

Paige apologizes to Nikki and says she’s completely in the wrong. Nikki accepts it and says that it did hurt because she isn’t a phony, she just likes the finer things in life. Paige admits that she was being judgmental.