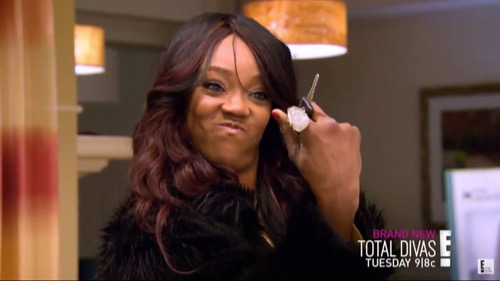 Tonight on E! the WWE’s Total Divas starring the Bella Twins and the rest of the Divas continues with an all new Tuesday July 28, season 4 episode 4 called, “Divas on Overdrive.” We’ve got your recap down below! On tonight’s episodes, Paige ditches Alicia for a new man.

On the last episode peace talked between Nikki and Eva end very badly; Nattie took a risk on stage; Paige was brought to tears during her first WrestleMania; and Brie and Bryan received the results of their fertility testing. Did you watch the last episode? If you missed it, we have a full and detailed recap right here for you.

On tonight’s episodes per the E! synopsis “Paige ditches Alicia for a new man; Nattie infuriates her husband with her unwillingness to say “no”; and Nikki confronts Bryan about not liking her.”

Tonight’s episode of Total Divas kicks off with Paige out to lunch with Foxy – they are getting ready to move in together, since they are on the road so much anyways there is no point in paying for two apartments. Paige fills Foxy in on her boyfriend Kevin Skaff, he is the lead guitarist for “A Day To Remember.” Foxy jokes that Paige isn’t allowed to have sex with her boyfriend on the couch.

Nikki is staying with Brie and Bryan while John is out of town. The three of them go out to dinner together, they start talking about how strange it is that Brie could be pregnant any day now. Bryan jokes that Nikki is going to get “left in the dust,” and it is for the best that John won’t let her have babies because she is “too selfish.” Nikki tries to laugh it off, but Bryan’s teasing it getting to be a little too much.

At Nattie’s house, she explains to TJ that she got a phone call from an animal rescue shelter. She is bringing over a bunch of cats that were abandoned – she is going to foster them and try to find them all homes. The woman bring over the cats in carriers and Nattie is shocked when she realizes that there are 18 cats. She moves them on to the sun porch and decides they can live there until they find them homes. TJ rants that this is ridiculous – and 18 cats is over the top.

Paige heads to a music festival to watch her boyfriend Kevin play – everyone at the music festival recognizes her and crowd start chasing after her for her autograph and to snap pictures with her. Kevin jokes that he just took over the festival, Paige thinks they could be the “Brangelina” of the music world.

At Nattie’s house she and TJ are freaking out because one of the cats escaped from their sun porch. They call Nattie’s mom and dad over to help them look for the missing kitten in the swamp behind her house. Nattie and TJ are going out of town tomorrow and Nattie begs her parents to watch the 18 cats while they are gone. Her dad whines that it is going to be a lot of cat litter.

Kevin asks Paige to move in with him, and she is thrilled, but she is going to have to break the news to Foxy that they are not going to be roommates. As predicted, it doesn’t really go over well. Meanwhile at Brie’s house Nicole is freaking out – Bryan took all of her clothes and shoes out of the closet and put them outside in the barn. She has to run to the barn in a towel to get dressed, and she can’t believe that Brie would actually go along with the joke. Nicole confronts Bryan and demands to know why he “hates her so much.”

It’s time for Foxy’s housewarming party, Paige and Kevin arrive and Foxy is wasted – she gives a speech in front of all of her friends and announces that it is Kevin’s fault that Paige didn’t move in to her new house with her. After her speech she jokes that Kevin looks just like Paige’s ex-boyfriend Bradley, and she starts calling him Bradley Jr. – which Kevin obviously doesn’t like.

Backstage at WWE, Nattie corners TJ and tells him that she agreed to give Heath, Titus, and Adam Rose a ride to the next show because something happened to their car. TJ tells her he doesn’t want to ride with them but it is too late, Nattie already said “yes.” In the parking ramp, Nicole and Brie are trying to load their stuff in to the trunk of the car – they are still bickering over Bryan putting her stuff in the barn and calling her “materialistic.” Paige rides with Foxy, even after their fight over the roommate situation. Trinity and her boyfriend Jon seem to be the only car having a good time driving to the next show.

In Paige and Foxy’s car things get awkward when Paige confronts her about the way she was acting t the housewarming party. Foxy shouts that Paige is acting crazy, she doesn’t know Kevin well enough to move in with him. Paige starts screaming that Foxy is being a bad friend, and shouts at her to pull over so that she can get in to Trinity’s car with her and Jon. Paige and Foxy wind up in a fight on the side of the highway, she hops in Trinity’s car. Trinity tells her that Foxy is acting up – but she has a right to be upset since Paige ditched her and their plans to live together.

Heath, Titus, and Adam Rose are whining that they have to pee so TJ pulls over, ironically he pulled over at a strip club. The guys race inside and Nattie follows them to try and get them back in the car. She winds up making friends with some of the strippers and they give her a quick pole-dancing lesson. Meanwhile, TJ is sitting outside in the car and fuming.

When they finally arrive at the hotel, TJ gives Nattie a lecture about not always saying “yes.” She is stressed out over the cats, and the guys drove her crazy on the ride there. TJ points out that saying “yes” every single time isn’t always a good thing.

Back stage at WWE, Trinity tries to talk to Foxy – she tells her that she and Paige have to work things out, and they can’t just ignore each other for ever. Foxy decides to try to make amends with Paige but then she gets distracted by her ex-boyfriend Wade. After Foxy hugs Wade and he leaves, she confesses to Paige that she thinks she is in love with him. Paige finally understands why Foxy has been acting so crazy – it’s because she is still hung up on her ex-boyfriend and she is lonely. Paige and Foxy swap a piece of chewed gum and announce that they are sisters again.