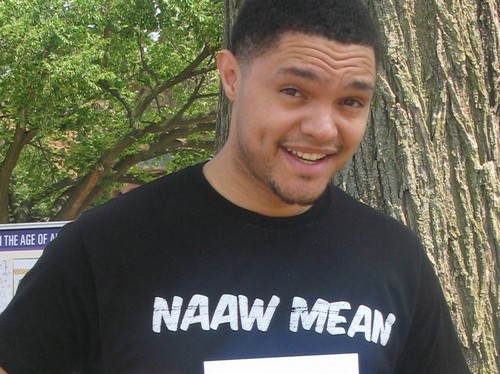 Trevor Noah is the new host of the Daily Show, taking over from Jon Stewart. So of course, every tweet that he ever sent and every comment he ever made has been picked apart and analyzed since the news broke.

In fact, several tweets that Trevor Noah made in the past [joking about Jewish people and women] have landed him in hot water with the public, leading to severe backlash. Some of the controversial tweets were:

“Almost bumped a Jewish kid crossing the road. He didn’t look b4 crossing but I still would hav felt so bad in my german car!”

“So I must make my woman fear my penis? RT @UberFacts: The more you fear something, the bigger it appears.”

“You can tell how angry the Chinese kid at the factory was by how hard it is to open the packaging.”

“Messi gets the ball and the real players try foul him, but Messi doesn’t go down easy, just like jewish chicks. #ElClasico”

“Behind every successful Rap Billionaire is a double as rich Jewish man. #BeatsByDreidel”

“I like women that don’t wear make up. For me they’re like pizza- still great the next morning!”

On the one hand, you could argue that Trevor Noah is a comedian and it’s a comedian’s job to push the boundaries at every opportunity. However, as a public figure – and ESPECIALLY as the new host of the Daily Show – he needs to be excessively careful about not offending minority groups, something that he himself should understand as an African American having grown up in South Africa.

Of course, Comedy Central can’t exactly back out now and denounce Trevor Noah, so they’ve already released a statement of support for him in spite of the backlash. The network stated, “Trevor Noah pushes boundaries; he is provocative and spares no one, himself included. To judge him or his comedy based on a handful of jokes is unfair. Trevor is a talented comedian with a bright future at Comedy Central.”

Well, isn’t the whole point of Twitter to judge people? Isn’t that kind of what it was created for? And while I’m sure Trevor Noah’s learned his lesson about being careful in the public eye, the mere fact of the matter is that he made these jokes, and that he thinks these ARE jokes – period. Should he be forgiven for that, as a comedian, when others might not get such a lenient response? Let us know your thoughts in the comments below.