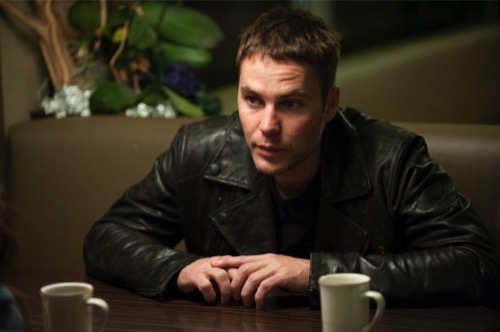 Tonight on HBO their new crime drama TRUE DETECTIVE airs an all new Sunday July 12 season 2 episode 4 called, “Down Will Come.”  We’ve got your recap down below! On tonight’s episode a pawn-shop lead helps the detail close in on a suspect in the Caspere case. Meanwhile, Frank’s [Vince Vaughn] road to legitimacy takes another detour.

On the last episode Ani let Ray know she was in charge after he goes rogue on the investigation, even though he stumbled on crucial evidence that took the case in a new direction. Meanwhile, Frank met with his former associates in the criminal underworld, but they made it clear they’re not taking orders from him anymore; and Paul hit the streets to see if Caspar’s face rang a bell. Did you watch the last episode? We recapped it all right here for you.

On tonight’s show per the HBO synopsis “The detail works a pawn shop lead to close in on a suspect in the Caspere case. Frank (Vince Vaughn) revisits his past to pay for his present.”

We will be live blogging True Detective season 2 episode 4 with all the up-to-the-minute details at 9PM EST so make sure to come back to this spot and watch the show with us.   Make sure to refresh often so you get the most current info!  While you wait for the episode you can catch a sneak peek of tonight’s episode BELOW!

Ani and Ray are in the evidence hangar looking at the car that was bombed.

Frank and Jordan talk about their fertility issues. She says maybe they should reschedule the appointment. She says that maybe they’ve been going about it wrong. She says maybe we should talk alternatives, such as adoptions. Frank’s not on board with this option at all. Jordan says that she might not be able to have a child and, if not, what should they do then? Frank says he needs to go to work because if he doesn’t sort stuff out soon on that front, well, then everything else won’t matter.

Paul wakes up in a bed. He seems hungover. He walks out into the living room and his friend from the army is there. Paul doesn’t remember going to his friend, who says that he met him at the club Lust, where Paul was trying to see if people recognized Casper’s face.

He quickly leaves his friends place and goes to look for his motorcycle; however, it’s not parked on the street. Soon, he’s mobbed by a news reporters. They bombard him with questions about his sex scandal, the one that got him placed on probation.

Ray and Ani talk about this state investigation. Ray tells her that Casper had his hands in a lot of money in a lot of different places, mainly land developments. He tells her that, when she’s working down here, she can’t be so naive. People play differently in Vinci.

Ray picks up Paul. Ray tells him to “take a cure” for his hangover. He opens the glove blox to reveal an assortment of things. Paul goes for the liquor. Ray asks him where his bike is. Paul says it was stolen. They talk about the scandal and how it’s altering him; Paul says that it’s changing him and that he doesn’t even know how to be out in the world anymore.

Ani and Ray are having a stakeout in front of the Mayor’s mansion. The daughter leaves and they follow her. They follow her to a hookah bar. Ani asks her if she knew Ben Casper. She says no. Ani asks her if her brother, Tony, knew Casper. She says that she’s not sure. Next, Ani asks if she thinks either Tony or her father was talking to Casper on the house line. She says she’s not sure. She tells them about her biological mother and how she killed herself in a psychiatric hospital under the watch of Dr. Pitler. This girl says that her father is a “very bad man,” but then she gets flustered and says she’s needs to leave, that “she shouldn’t be talking” to them.

Ani goes to visit her sister, Nina. She says she’s saving up to go to Cal Arts. She says that she’d never do anything more than her webcam work; she’d never do any of the sex parties. Ani asks her were these parties are typically held. Nina says, “I don’t know, up North?”

Paul meets with his (ex) girlfriend in a diner. He says that he doesn’t blame her for what she did, and then she reveals that she’d pregnant. She doesn’t believe in abortion and tells him that she’s keeping it. He tells her that he’s glad she’s keeping the baby. He thinks they should get married. He wasn’t sure at first, but he knows he loves her. He wasn’t sure at first, until this moment, right here, right now. He says it’s a blessing.

Ani and Ray go to visit her father to ask him about Dr. Irving Pitler. He says that he was doing active research in his spiritual community in the 80s. Next, they ask him if he recognizes Casper. He does. He shows them a picture of them all when they were younger. The mayor is in the photo, too.

Ani and Ray go to checkout some of the sites that Casper was visiting. It’s farmland. They meet with an EPA agent. Ani asks him why someone would be so interested in these lands, which the agent said are filled with unsafe levels of various chemicals.

Jordan and Frank meet with a potential business partner; Frank wants to bring him into his club business. The guy isn’t interested yet and needs more time to think on it. The guy leaves and Jordan and Frank start arguing; these financial woes are definitely putting strain on their relationship.

Mercer, the guy with whom Ani had a brief fling, has filed a sexual assault charge. IA will be investigating her. Ani says that this definitely wouldn’t have happened if she were a man, but her boss says that it definitely would have if a complaint was filed. She’s been suspended and can’t enter the department until the investigation is completed. Ani asks if the Vinci Mayor had anything to do with this. Her boss doesn’t respond but says that there’s word around that she has some major gambling debts and, if this is true, she best straighten out her bank records before IA gets hold of this info. She leaves. Of course, she’s pissed.

Frank and Ray meet in their go-to bar. Frank tells him that he’s getting back into some things, such as his club. Frank says that he likes him in his sober state and says he could use him in this “fuller capacity.” He says that “he’s got stuff coming” and he could really use him. Ray says that he’s not anybody’s muscle.

Ray visits his son, Chad, and gives him a memento, something that belonged to his grandfather. He tells him to look at it when he wants to remember him.

At the casino, Frank tells his squad that they need to locate this pimp named Lito. He might have answers.

When they are a lone, Jordan asks Frank if “this is worth sticking out.” She’s talking about their situation. Should they continues fighting for more. Frank returns, “If we walk now, what do we walk with?”

Meanwhile, in the same area, Ani, Paul, Ray, and a squad of cops go to investigate the guy named Lito. As they’re walking down the street, shots are fired, and several cops are hit. The gunman is firing from a window and, soon, after more shots are fired, the top level of the building explodes.

Frank is nearby. He tells Jordan to go inside.

Some people are getting away in an SUV.

Ani chases after it.

Ray and Paul try to cut it off.

The SUV speeds through the protesters, hitting some of them. The SUV crashes into a bus. The gang gets out of the SUV and starts firing. Countless civilians are shot.

One of the men takes a hostage.

He shoots the hostage and tries to get away but Paul and Ray have him surrounded. They shoot him and kill him.

Ani looks around at the carnage. Ray, Ani, and Paul are all okay.