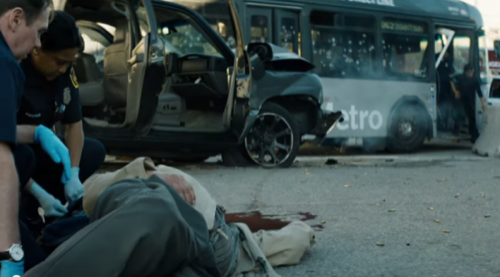 Tonight on HBO their new crime drama TRUE DETECTIVE airs an all new Sunday July 19 season 2 episode 5 called, “Other Lives.” We’ve got your recap down below! On tonight’s episode Ani [Rachel McAdams] and Paul  [Taylor Kitsch] chase a lead up the coast.

On the last episode the detail worked a pawn shop lead to close in on a suspect in the Caspere case. Frank (Vince Vaughn) revisited his past to pay for his present. Did you watch the last episode? We recapped it all right here for you.

On tonight’s show per the HBO synopsis “Ani and Paul chase a lead up the coast; Ray and Frank mull taking new directions in life.”

We will be live blogging True Detective season 2 episode 5 with all the up-to-the-minute details at 9PM EST so make sure to come back to this spot and watch the show with us.   Make sure to refresh often so you get the most current info!  While you wait for the episode you can catch a sneak peek of tonight’s episode BELOW!

The aftermath from the shootout is brutal and chaotic. Countless dead bodies litter the street.

It’s been 66 days since the murder of Casper. Frank is watching the news in his house, where moving boxes are all packed up. He gets dressed for the day. Jordan is in bed.

Frank gets in his car and hears on the radio that construction will begin on a new rail line.

Ray’s former boss comes to visit him. He says the case has been closed. Ray asks if the Mexicans killed Casper. Ray’s former boss says that he needs to get out of this apartment, which is only for municipal employees, which he’s not anymore.Turns out that Frank has quit the force and is, instead, working for Frank as his muscle.

Meanwhile, Ani is in a support/counseling group for people who’ve been involved with sexual harassment cases.

Paul is in mediation with the actress who accused him of sexual misconduct. He continues to say that he didn’t do anything to her.

A man named Gonzales comes to see Frank at the Poker Room and talks about partnering up, but Frank dismisses him.

Ray is also in mediation with his ex-wife regarding the custody battle. The judge orders him to submit to a toxicology test, as well as a paternity test. Ray’s angry at this. Apparently, his ex-wife was sexually assaulted around the time of conception and she suspects Ray not to be the real father – despite the fact he raised him since he was a baby.

Ray’s lawyer says that he’s going to need some more money if he wants to continue fighting this – because it’s going to get expensive.

Ray goes to Frank and asks for more work.

Paul tells his mother that he’s going to marry his girlfriend. She doesn’t agree with this – or where his life’s going. She says that he could do anything he wants in this world, and then she says that if she were born a man she would’ve had the world. Paul grabs a backpack he hid with 20 grand stashed away. Turns out she spent it all. Next, she tells him that she raised him, that he destroyed her career as a dancer, and she put up with all his “strangeness,” including all of his close guy friends. She insinuates that she knows he’s gay – or, at least, familiar with men.

Ani’s working in evidence in-take. Her former partner comes down to see her and says that “someone was trying to do her in.”

Paul’s having dinner with his girlfriend and her mother, who wants to come live with them once the baby comes.

Jordan says that she really thinks they should consider adoption, and she thinks that he was so opposed to the idea because he was saying no to the life he once had as an orphan.

Ani meets Ray at the lounge he often meets Frank at. Ani says that she doesn’t think they really “cleared” the Casper case, despite the fact that everyone’s blaming it on the Mexican gangs. Ray says that it’s not really their problem any more. He says he’s gotten out of detective work. Ani brings up the case of the missing girl she was asked to look into. Turns out that this woman disappeared not long before Casper was found dead.

Jordan and Frank snuggle up on the couch.

Ray goes to visit/beat info out of Dr. Pitler, who, as it turns out, helps in the prostitution ring by doing plastic surgery on the girls. He’s a psychiatrist but has training in simple plastic surgery techniques.

Ani’s on the beach with her sister. Ani tells her sister that she needs to get an invite to the next escort party. Ani wants to look into everything. Her sister says she got into CalArts. Ani’s happy.

Paul is looking into the diamond. The jeweler he visits says that a cop came in a while ago asking about these same diamonds. Turns out it was Dixon. Paul and Ani realize that Dixon would’ve had to have known about the diamonds prior to their discovery of the safety deposit box.

Ani and Paul go to investigate the address that her ex-partner gave to her. They arrive at a house. It appears empty.

Ani notices some birds circling in the sky. She says they’re carrion birds.

They discover an old shed. There’s a horrible aroma. There’s a chair where someone has been tortured.

Ray visits Frank and says they need to talk. Now.