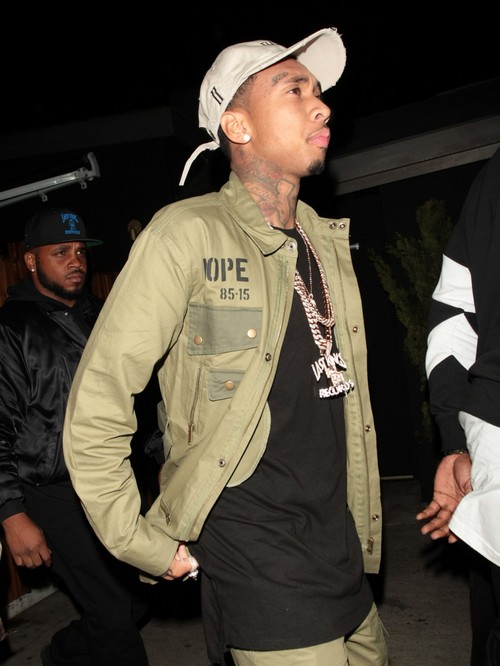 Tyga just may write a tell-all about Kylie Jenner and Kim Kardashian. Does the rapper blame Kim for the couple’s break-up? Is he planning on cashing in on the Kardashians? Kylie and Tyga have split on Thursday, November 20 – his 26th birthday- just in case you hadn’t heard the news.

Radar Online insiders claim Kylie’s ex-boyfriend plans to cash in on the relationship. Allegedly Tyga is thinking about writing a tell-all that will expose the Kardashians and Jenners as frauds, as if that weren’t already common knowledge.

What happened to cause Kylie to call things off? The sweethearts just went public in August right after Kylie turned 18. We all know Kendall Jenner’s feelings about younger sister Kylie’s boyfriend – the fashion model made it clear there no love lost between them. But what is Kim’s problem with the guy? Allegedly Kim found out Tyga was going to go public and expose that Kim Kardashian’s marriage to Kanye West is all for show.

Is Kris Jenner is freaking out? Does the momager think the rapper is in a position to bring down the Kardashian empire? An insider close to the family reports that Tyga never signed a confidentiality agreement because Kylie Jenner and he were friends long before romance blossomed. “Everyone just assumed he was on the team. But Tyga knows more about [the Kardashians and Jenners] than almost anyone alive,” the source says.

There is some serious damage control needed and Kris Jenner allegedly has already begun trying to spin the split to make Tyga look like the bad guy. “Kris’s only concern is that he is going to expose them for the frauds they are,” another source revealed.

Not only does is Tyga ready to Kimye’s marriage is a sham, the singer is prepared to tell the world just how many plastic surgeries Kylie really had because he was here with Jenner in the hospital each time.

Is Kim Kardashian to blame for Kylie Jenner’s split from Tyga? Or was it Kendall Jenner’s fault – or a combination of the two? How much money will Kris Jenner need to shell out so that the rapper will keep the Kardashians secrets?

Let us know what you think in the comments section below and come back to CDL for all your Kardashian and celebrity news, gossip and rumors.

Tyga Alone on Birthday! by FameFlynet