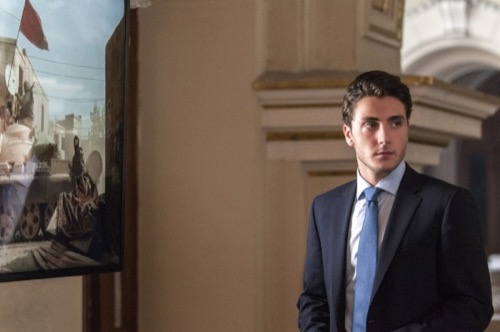 Tonight on FX their original series, TYRANT airs with an all new Tuesday July 21, season 2 episode 6 called, “The Other Brother,” We’ve got your recap down below! On tonight’s episode, Barry [Adam Rayner] opts to stay in Abbudin and take a stand against the Caliphate.

On the last episode, Molly and Sammy went to Abbudin to address the disputed over his inheritance; Jamal and Tariq’s feuded over military strategy reached the point of no return; Barry was afraid his cover would be blown and that those who helped him could be in danger when the Army of the Caliphate arrived. Did you watch the last episode? If you missed last week’s episode we have a full and detailed recap, right here for you.

On tonight’s episode per the FX synopsis “Barry opts to stay in Abbudin and take a stand against the Caliphate; Jamal leans on the Chinese diplomat to promise military support; Sammy is shocked to learn that Abdul has been kidnapped by the Caliphate.”

The city of Ma’an has been overrun on tonight’s episode of “Tyrant” and from all appearances it looks like the caliphate is gaining ground.

However the revolution is a hollow dream and, even as the people are rejoicing to rid themselves of the Al-Fayeed, there are cases such as Daliyah’s. Daliyah was removed from her home, her husband, and her child all because she grabbed a leader in the caliphate’s interest. And now nothing her husband does can convince her captors to let her return home.

So after Barry returned to the Al-Yazbek’s family home, filled with new purpose, he found out about Daliyah. And that he reaffirmed his reasons to stay and fight.

For something had occurred to Barry. It seems he finally realized what being Basam Al-Fayeed actually meant. And as a member of the ruling family he now knows where his duty lies.

Though his brother, funnily enough, is suffering from an ongoing identity crisis. See, when Jamal first took up his duties, he thought he could simply do whatever he wanted as the unelected president of Abuddin. And later that was even one of his reasons for why he chose to do away with Barry when his younger brother attempted to warn him about his excessiveness.

Yet, with everything that’s going on, Jamal can admit to himself that Barry was right.

Barry had literally warned him about everything that’s happening on now but, rather than to listen to him, Jamal ended up preferring his uncle Tariq’s position on ruling. Hence it was Tariq that lit the match that caused all of this. And Jamal ultimately needed someone to blame for all of his frustrations.

Jamal later bludgeoned his uncle to death with a statue. And, surprisingly, that was the one thing that could unite his mother and wife into doing something together.

Jamal had killed one of his leading generals and his mother for one knew he wasn’t as militarily inclined as his father. Thus she proposed an option to her daughter-in-law. She mentioned her grandson Rami and simply asked for Leila to consider the notion.

Earlier Leila had been hesitant when it came to accepting her husband’s illegitimate son but if Rami could keep them in power then she had to see what his grandmother saw in him.

And despite becoming convinced herself, Leila found it hard to talk Rami into staying. He said Abuddin wasn’t his home anymore. And that he had other people, other nations waiting for him. So Leila then had to play the only card she had left. She told him that if he stayed he would be protecting his mother and his grandmother’s people.

She played on the young man’s sympathies and that’s how she enlisted Rami.

Ahmed, however, didn’t appreciate her efforts. As far as he knew, he was his father’s only son thus his father’s only heir. But while he was out helping Rami find an old boyfriend, Rami had come in and gotten elected as a new general. And that’s something Ahmed cannot tolerate.

Sammy entered the country in order to regain his inheritance from his father. Apparently the Al-Fayeed family was refusing to release the funds so he had to travel all the way back to Abuddin to fight them in court. But, as he was in the country, Sammy found out about what happened in Ma’an and that’s when he knew his inheritance could actually help several men.

The Caliphate had taken men known to have homosexual tendencies as hostages. And one of them was a good “friend” of Sammy’s. So once he found out where Abdul was thanks to his cousin’s Ahmed’s intervention – he started to look into ways he could pay off those men’s ransom.

All he had, though, to collect the money was openly denounce his father.

Barry was considered a traitor in Abuddin for his failed resistance. Though everyone believed he had gained his comeuppance with his execution and the truth is Barry is out there fighting for a country that was told to celebrate his death.

Barry did find the resistance and he was the one that led them to their first victory. So it’s now both brothers that are fighting the caliphate. And while Barry is inspiring the tribes of Ma’an, Jamal has gotten his son to enlist an army of mercenaries.

So if we’re going to be honest then the caliphate really doesn’t stand a chance with both Al-Fayeed brothers working against it.