BY Stormy Elizabeth on August 20, 2015 | Comments: one comment
Related : Recap, Television, TV, Under The Dome 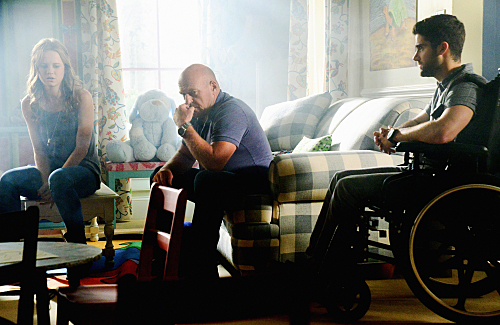 Tonight on CBS Under the Dome, based on the novel of the same name by Stephen King, returns with an all new Thursday August 20, season 3 episode 10 called, “Legacy.” We’ve got your recap down below! On tonight’s episode a surprising alliance forms in hopes of attacking the Dome, but Big Jim [Dean Norris] and Julia [Rachelle Lefevre] remain wary.

On the last episode Big Jim and Julia form plans to end Christine’s control over the town with a life-or-death plot involving Barbie and Eva. Also, Joe and Norrie researched the Dome’s ultimate agenda and Hunter uncovered more information on Aktaion. Did you watch the episode? If you missed it we have a full and detailed recap, right here for you.

On tonight’s episode per the CBS synopsis “a surprising alliance forms in hopes of attacking the Dome, but Big Jim and Julia remain wary. Elsewhere, Hunter receives encrypted files detailing the possible final effect the Dome will have on the infected townspeople.”

This is definitely one episode that you don’t want to miss. Don’t forget to stay tuned to Celeb Dirty Laundry where we will be live blogging the premiere episode of season 3 Under the Dome.

#UndertheDome begins with Julia and Barbie kissing by the wall. He’s horrified that he tried to kill her and she tells him she loves him and is sorry too. He says he loves her and says she saved him. Julia says they need to go help the resistance. The kinship are attacking the funeral home and shooting into the house. Jim returns fire and they shoot back. He arms Norrie and tells her to shoot. He says they want to burn them out and they shoot down someone with a Molotov cocktail.

Hector Martin is there and his armed men start shooting at the kinship. They tell Big Jim and the others to come with them if they want to live. Julia tells Barbie it’s been a nightmare since they came out of the cocoons. Barbie tells her Eva is pregnant and the baby is his and is innocent. Julia says his daughter is the next queen and Christine paired him with Eva for a reason. They spot the burned up funeral home and Barbie goes to check it out.

Sam and Junior talk about the schematic. Junior says they need Joe to build the device Christine needs. Junior tells Joe they need his help because the dome is calcifying and he calls Sam an ass. Junior starts beating on him. Barbie says there are no bodies in the house. He says the kinship doesn’t know he’s apart and he can check out city hall. Julia says she will look elsewhere for Big Jim. She asks about Eva and he says all he feels right now is anger.

Barbie gives her a gun and takes off. He tells her she can’t be seen because he has to pretend to kill her. She gives him her car keys as proof and they make a plan to meet later. She sees something drawn on the porch and Indy runs up to her. She and Indy take off. Hector Martin sets up base at a house with the resistance. Norrie is worried about Joe. Jim tells Hector it’s his safe house and he can’t stay. Hector says he saved his life.

He says Dr Marston is missing and asks Jim where he is. Jim says he’s in a safe place and they can take him to the doc. He tells Hector that it’s just the two of them. Hector says he doesn’t call the shots and they disarm him. He demands to see Marston and Jim leads the way. Barbie is back at city hall trying to fit in and sees a lot of injured people. He gives an order and walks on. Barbie finds Junior who tells him where Eva and Christine are and says they can’t be disturbed.

Junior fills Barbie in on what they need Joe to do but that he’s not cooperating. One of the militia guys shows Norrie how to use her handgun but says taking a life can change you. Lily came into the dome with Hector. He tells her about a hidden encrypted folder in the files she sent. She asks him to open up the file. Hunter has questions but she says she has to make sure Hector is okay with her telling him. Jim tells Hector that he rescued Marston but then he was attacked and killed.

Hector tells Jim that Junior was one of the first infected. There’s a flashback of Hector watching a scientist assemble the broken parts of the egg and it healing and glowing. They thought it meant a clean energy solution. Instead, the researcher was infected. Hector says Marston was working on a cure and got DNA from Christine. Hector realizes Jim likely killed Marston and is ready to kill Jim. But Jim says he can help him and is the only one who can help.

Junior brings Barbie to see Joe – he tells Joe the resistance is dead including Julia. Junior chokes Joe and Barbie kicks him out – Junior thinks Barbie is playing good cop/bad cop. Barbie talks to Joe and says Julia is alive and he’s back from the kinship. Barbie says they have to get out and Joe says he fell for this with Sam. Joe tells Barbie he has to stay and build the device but if he doesn’t they’ll all suffocate or he can build it and they all go free.

Joe says if they work with the kinship, they can find out the plans. Barbie says they’ll kill him after he builds it. Joe says they’re all dead if he doesn’t. Barbie tells Junior that Joe is working with them then tells Junior to remember his place. Junior asks Barbie what it felt like when he killed Julia. Barbie says like he gave a great gift to the cause. Jim needs to get a sample of Christine’s DNA to develop the cure. We see a flashback to the first infected yelling after the queen is born, the war will begin.

Turns out Patrick, the first infected, is Lily’s dad. We see her sitting by his hospital bed where he’s restrained. He rants at her about them living on. Jim asks if it’s true – he thinks they’re manipulating him. Julia shows up with Indy and Jim greets just the dog. She tells them she cured Barbie but Hector doesn’t believe it. Hector says Barbie is only dormant and he can ramp up any time. Julia says it’s a different egg and he can’t know that.

She asks to talk to Jim. Norrie asks what if Hector is right and says they need to get Joe and Barbie and cure them. Norrie tells Julia that Sam was okay then went back. Norrie says she felt a pull to the kinship. Julia says they need to trust Joe and Barbie. Julia wants to know why Jim is cooperating with Aktion. Jim wants to work with them to get the cure. Jim tells her Eva is still alive. Julia leaves to meet Barbie. Barbie fills Julia in on Joe, the dome and the calcification.

Julia wants him to meet Hector but he wants to go to the farm and check on Eva and the baby. Julia doesn’t want him to go but says he’ll be a great dad – only she wishes the baby was theirs. Eva is freaking out at the barn and complains about Barbie not being there. Charlotte, the girl Junior wanted, is led into the barn and Eva says the queen needs her. Charlotte kneels and touches her stomach. There’s a purple glow and Eva’s eyes go black.

Joe has Sam working with him on the project and Sam tells him he has no need for his forgiveness. He annoys Sam into leaving because he saw Norrie lurking at the window. He opens it and she says she has to break him out. Joe says he can’t go and explains why he has to stay. She leaves him working. Jim tells Hector he knows this is all his fault since Christine and Eva work for him. Hector says he had no idea a dome would come down since it never happened before.

Hector says that’s why he has to save them. Jim says he has something bigger and says there’s a way out. He tells him Christine is going to bring the dome down and explains about Joe. He and Jim strike a deal that will make them both look good. Barbie busts into the barn and is shocked to see Eva heavily pregnant. Eva tells him the baby is kicking and says Christine made it happen with the help of some young devoted women.

She says the baby will be born any day and they must keep her safe. He tells her Julia won’t be a problem anymore. They kiss. Junior has another guy with him looking for Julia’s body. Junior says Barbie lied and is a traitor to the kinship. He says he’s going to kill Christine. Joe studies the amethyst and Sam whistles and it sparks to life. Hunter hacks the folder. There’s an image of the alien glittery being and he sees it’s Lily’s dad – he’s not dead.

Lily asks Hector if they can get out like Jim said. Hector says they’re safer there. We see a flashback to Hector talking about blowing up the red door so the military can’t follow them. He then went to see Patrick the glowing alien, his former BFF. He tells Patrick he has to go and can’t take him along. He tells him he’s sorry. Patrick screams his name. Julia sees the mass grave of dead girls and she can see their life has been drained. She’s spotted.

The midwife says they sacrificed themselves for the baby. Julia is getting ready to shoot her but Norrie is there with her silenced pistol and puts her down. Barbie and Eva take a walk and Julia and Norrie see them kissing and how pregnant she is – to busting.