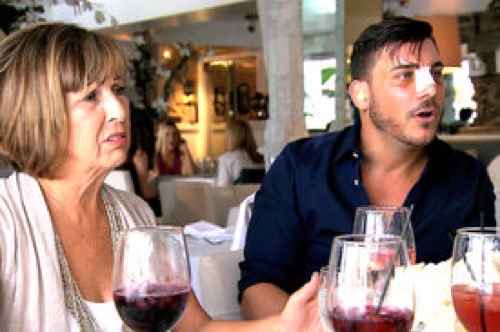 Tonight on Bravo Vanderpump Rules returns with an all new Monday November 2, season 4 premiere episode called, “Playtime’s Over,” and we have your weekly recap below. On tonight’s episode, in the Season Four premiere, Lisa Vanderpump vows to take SUR restaurant to new heights.

On the last episode, in the Season 3 finale, SUR’s annual photo shoot turned tense as Tom Sandoval confronts Jax for stabbing him in the back. Katie forced Tom Schwartz to take action in their relationship, while Tom Sandoval and Ariana took their own relationship to a whole new level. While Stassi accepted Lisa’s invitation to the restaurant’s anniversary party, she found returning to SUR more tense than nostalgic. Did you watch the last episode? If you missed it, we have a full and detailed recap right here for you.

On tonight’s show as per the Bravo synopsis, “in the Season Four premiere, Lisa Vanderpump vows to take SUR restaurant to new heights. Scheana throws a costume party for her 30th birthday, but when Kristen shows up Ariana and Sandoval accuse Scheana of being a fake friend. James’s reckless behavior threatens his DJ career, Schwartz realizes he’s ready to commit to Katie, and a visit from Jax’s mother offers rare insight into his life before SUR.”

Tonight’s episode is going to be another drama packed one, which you won’t want to miss. So be sure to tune in for our live coverage of Bravos’ Vanderpump Rules Season 4 premiere — tonight at 9PM EST! While you wait for our recap, hit the comments and let us know how excited you are about the new episode of VR tonight.

Lisa Vanderpump has decided on this season of “Vanderpump Rules” to put her focus back on SUR. It seems she doesn’t think SUR has been doing so well what with the lower gratuities they’ve been collecting. So she’s back now to get her restaurant in order.

However Lisa plays favorites and villains. This season she’s chosen to be lenient on James because she really likes what he’s been doing at PUMP. He’s been a pretty good DJ so far and that’s why she’s chosen to overlook another one of his girlfriend’s, Kristen’s, incidents.

Then, once she was done warning James rather than firing him, she went on to use a staff meeting to berate Tom for his lackluster showing at the bar. She claimed he’s only worked a handful of shifts in over six months. Although Tom doesn’t understand where she’s coming from. He swore he worked more than that and would have fought Lisa’s accusation if he could.

But no one argues with Lisa. She refuses to talk over other people and believes she should be respected both for her position as well as her age. So Tom had to learn to bite his tongue and take the criticism. Even if there was a chance that he was being unfairly punished.

Yet Kristen was being Kristen again. Meaning she was once again turning out to be a problem and she came really close to ruining James’s second chance.

Apparently James and Jax had been talking about his career and they had mentioned Kristen. So Jax had tried to warn the other man. He told James that no girl was worth is giving up his dream for. And James went “yeah, sure, man” because a part of him did get where Jax was coming from.

But then Jax texted his girlfriend, Kristen’s friend, about their conversation and the girlfriend told Kristen everything Jax had told her. So that caused a problem. Kristen was left upset with James for gossiping about their relationship and he in turn was upset with Jax. And naturally that made Kristen come down to SUR.

Otherwise known as the one place she wasn’t allowed to be. Lisa had made it clear in no uncertain terms that Kristen wasn’t welcomed at SUR or PUMP anymore. And that she didn’t want James bringing his girlfriend around. Yet Kristen broke the rule and nearly cost James his job. So he wasn’t in the mood to deal with her that night.

He fobbed her off and then the next morning he went over to hers with flowers. And while she liked the flowers, she felt like James was being too Jekyll and Hyde. That he had an attitude one moment and was quick to get over it in the next. So she told him that she didn’t want the drama and, funnily enough, James said the same thing.

He said he just wanted to have fun this year and be cool with everyone. So they agreed to go to Scheana’s themed party. And they both said they were going to be on their best behaviors. Though, in the meantime, Tom and Ariana were actually apprehensive about going to said party because they heard Kristen was going to be there.

It seems they thought she was going to create issues for them but the only one that should have been worried was James. He knew for a fact that he and Kristen couldn’t go a night without having a fight yet he still took her to Scheana’s party.

Scheana wanted to throw a party for her 30th birthday and she wanted everyone to enjoy themselves. So she made it “the best of the decade” theme. And everyone, minus Lisa and her husband that is, showed up in costumes.

Including Jax who took his mother as one of his dates because she was turning 60. And his mother was such a dear. She was sweet and funny yet had her son’s number. So she knew what kind of man he was and didn’t fall for any of his tricks.

And she ended up enjoying her birthday thanks to her son who introduced her to all of his friends. But it was those same friends that was starting drama. Ariana and Tom had later spoken at the party and Ariana said she feels like Scheana was being a fake friend to her. It seems if Scheana had really been her friend that Kristen wouldn’t have been welcomed at all.

Yet Kristen hadn’t approached them. She mostly stayed by James and it wasn’t until they got into a fight about his drinking that she paid compliments to Scheana.

Though speaking of the drinking, Kristen was right about James. He can’t hold his liquor and doesn’t seem to know when to stop for his own good.