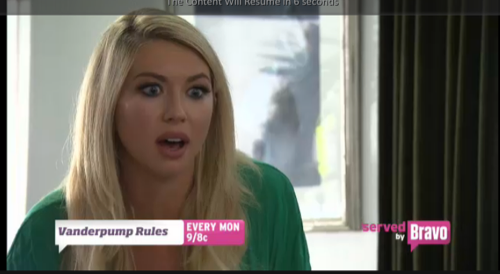 Tonight on Bravo Vanderpump Rules returns with an all new Monday December 21, season 4 episode 8 called, “Dirty Thirty,” and we have your weekly recap below. On tonight’s episode, Ariana Madix reveals the emotional reasons why she wants Tom Sandoval to stick around after her birthday, to little effect.

On the last episode, Lisa treated a group of underprivileged kids to the full SUR experience, including a serving of bad behavior from her staff. Jax stood up for Kristen when her break up with James turned ugly. Ariana’s mood soured when Sandoval contemplated going to Vegas without her, Schwartz and Sandoval failed to impress with their business plan, and Jax asked Brittany to move in with him. Did you watch the last episode? If you missed it, we have a full and detailed recap right here for you.

On tonight’s show as per the Bravo synopsis, “Ariana reveals the emotional reasons why she wants Tom Sandoval to stick around after her birthday, to little effect. Lisa advises the girls to get back at their boyfriends for going to Vegas, so Lala, Katie and Ariana literally kiss and make up at Scheana’s sleepover. Jax, Schwartz and Sandoval strive to be loyal to their girlfriends, but struggle to keep their pants on in Sin City.”

Tonight’s episode is going to be another drama packed one, which you won’t want to miss. So be sure to tune in for our live coverage of Bravos’ Vanderpump Rules season 4 episode 8 — tonight at 9PM EST! While you wait for our recap, hit the comments and let us know how excited you are about this new episode of VR tonight and what you think of the current season so far.

Peter and Jax wanted to have a boys’ trip to Vegas on tonight’s episode of “Vanderpump Rules”. However the idea of a boys’ trip didn’t sit so well with certain girlfriends of their group. Like Ariana and Katie who equally felt they were being disrespected.

And, you know what, even Lisa Vanderpump had some misgivings when she heard about the trip

Lisa had said that she couldn’t understand the guys. Both Peter and Jax were supposedly in serious relationships of their own yet their boss felt they were risking that by planning a trip to Sin City. Especially as Jax once impregnated a girl there.

So Lisa did try to warn but ultimately she had to give the guys the time off if they were going to find someone to cover their shifts. And unfortunately, what she had warned the guys about didn’t stick. They were still intent on living it up in Vegas and they had brought their friends in on their grand plan.

And that’s how both Tom and Schwartz got into trouble.

Literally the day before the trip was supposed to happen, Ariana was going to be throwing a huge birthday party for herself. And so she didn’t want her Tom to go because she knew he would have to leave in the middle of the night. Thereby leaving her to wake up alone on the day after her birthday.

Then to be even more clear, Ariana had also told her boyfriend that it would hurt her if he left and that she didn’t think they a boys’ trip was such a great idea in the first place. And surprisingly Katie backed her on the last part.

Katie didn’t want Schwartz to go either. They had talked things over after the last time he had gone on a boys’ trip which had also been the time he had cheated on her. So the whole idea of another trip brought up certain insecurities especially as there had been already an agreement in place between them. That basically said no more boys’ trip.

But like the snake in Eden, Peter used Ariana’s childlike party to lure his friends away from their girlfriends. He told them all about the hard hats they would be wearing and how they were going to drive a bulldozer. And that led to both Tom and Schwartz wanting to ditch their girlfriends.

Which they later did.

And with the restaurant short on staff, Ariana ended up having to work all weekend so she another reason to be upset with Tom. But Lisa was just full of advice and she had some for Katie and Ariana. She told the ladies that they should use Scheana’s party as a way to get even.

She said that they should all go out and stay out all night. And that when their boyfriends called, don’t answer. Let them think their girlfriends were having too much fun to answer the phone.

So Katie and Ariana were going to use some of that advice. They had both set out to have fun despite their boyfriends being in Vegas. And in the end, Ariana actually felt grateful that she had such an amazing group of friend that she knew she could rely on.

Although, once Scheana’s party began, Scheana felt like Lala should come and so she kind of invited her at the last minute. And luckily for her, Lala had been in the mood to accept the olive branch. So then girls started to drink and that’s when they came up with the bright idea to send pictures of themselves kissing each other to the guys in Vegas.

They had wanted the guys to understand that while they couldn’t kiss girls – there was no rules that said their girlfriends couldn’t kiss each other.

And so the guys retaliated. They began to peck each other and send pictures back to Scheana’s party until eventually they called it a night. The guys had driven bulldozers and had gambled plus they had also rubbed their butt cheeks on each other.

So they had been done for the night and they were going to call it a night. But Tom wasn’t ready to go to be bed and he talked his friends into going out one more time.