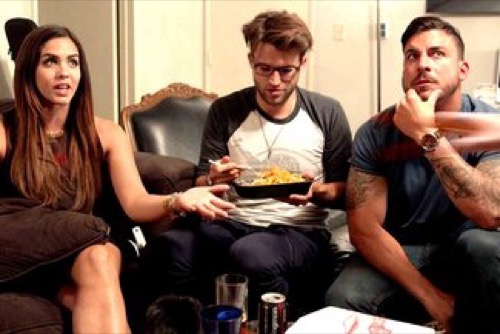 Tonight on Bravo Vanderpump Rules returns with an all new Sunday December 27, season 4 episode 9 called, “What Happened in Vegas,” and we have your weekly recap below. On tonight’s episode, Tom Sandoval and Tom Schwartz learn that not all that happens in Vegas stays in Vegas when they surprise their girlfriends with shocking news from their trip.

On the last episode, Ariana revealed the emotional reasons why she wanted Tom Sandoval to stick around after her birthday, to little effect. Lisa advised the girls to get back at their boyfriends for going to Vegas, so Lala, Katie and Ariana literally kissed and made up at Scheana’s sleepover. Jax, Schwartz and Sandoval strived to be loyal to their girlfriends, but struggled to keep their pants on in Sin City. Did you watch the last episode? If you missed it, we have a full and detailed recap right here for you.

On tonight’s show as per the Bravo synopsis, “Sandoval and Schwartz learn that not all that happens in Vegas stays in Vegas when they surprise their girlfriends with shocking news from their trip. Kristen returns to SUR and apologizes to Ariana, but Ariana is not ready to forgive and forget. Lisa helps Katie examine Schwartz’s commitment issues, Sandoval and Ariana take the stage at the Improv, James tries to sabotage Jax’s love life, and a visit from Sandoval’s mom sheds light on his pre-SUR life.”

Tonight’s episode is going to be another drama packed one, which you won’t want to miss. So be sure to tune in for our live coverage of Bravos’ Vanderpump Rules season 4 episode 9 — tonight at 9PM EST! While you wait for our recap, hit the comments and let us know how excited you are about this new episode of VR tonight and what you think of the current season so far.

Something did end up happening in Vegas but it was actually more on the embarrassing side. It seems that both Tom and Schwartz had a problem with calling it a night and so they were out on the town until four a.m. in the morning when they suddenly got a bright idea. They thought that they should each get a tattoo in honor of their girlfriends.

Katie funnily enough thought it was sweet that Schwartz tattooed his nickname for her on his butt. Although she like Jax felt Schwartz would be screwed if he ever goes to prison with a tattoo like that. And like expected, Ariana hated the flaming “A”.

She asked Tom why he would ruin his perfectly nice butt and she was not kidding. His flaming “A” looked like a lot of things to different people. Katie at first thought it was a dragon and Scheana later heard the tattoo looked like strips of bacon.

So Tom had really messed up and therefore he later agreed with Ariana to have it removed. But, because it was fresh, it was still physically sore and a sore topic when he went out to lunch with his mom. His mom by the way is a firefighter and has been one for nearly thirty years. And even Lisa believes Tom’s mom to be a tough woman but somehow Tom did not inherit any of her fire.

He caved on the tattoo fairly quickly and his friends were right about how Ariana would see his tattoo and what Tom’s countermeasure would be.

Therefore Jax didn’t exactly argue with Kristen when she said she wanted to make peace with Ariana because he knew that with Ariana’s permission – he and Tom could hang out with Kristen again. Jax and most of the group you see have made their own peace with Kristen. And for the most part, they’ve gone back to having pretty great relationships with each other.

But Jax wasn’t sure Tom would let him even invite Kristen to their joint birthday vacation. So that’s why Jax wanted to suss out Ariana. And get her reaction.

Ariana had spoken about what happened with both Tom and his mom. And she said she didn’t want to come across as someone that was bitter or unfair but that the reason she didn’t quite trust Kristen was because Kristen’s apology didn’t really seem genuine. So Tom and his mom reassured her that Kristen has done a lot of messed up things to her and Tom. And that it was only natural for Ariana to be on the fence.

But that’s a problem with the others. Katie and Schwartz got to talking and they think they should give Kristen a second chance that she’s so clearly is fighting for. And if Ariana and Tom continue to want to cut themselves off from everything that involves Kristen – then they might be moving into Stassi territory.

Because if there was one thing that most of their friends could agree upon it’s that Kristen is much better now that she’s no longer with James.

James though wasn’t concerned about what the guys thought about him. He was caught in Lala and Lala was pretty busy playing him against Jax. She said she’s just likes making out with James and that she likes to flirt with Jax but she really shouldn’t be inviting drama by stepping into the thing that’s between James and Jax.

And yet that’s what she did at Tom and Ariana’s diary showcase. After Ariana and tom had finished embarrassing themselves by reading out loud from their old journals, Lala found Jax at the bar and she began flirting with him. So James came over and tried to “stake his claim” by making out with Lala in front of Jax but, once he had left, she told Jax that he should have beaten James to it.

So she definitely playing with fire.

But the huge argument later was not her fault, it was Katie’s. Katie had spoken with Schwartz about the possibility of Kristen going on the birthday vacation with the group. And so he brought the topic up again when he was with Tom, Ariana, Jax, and Katie.

And like expected, both Tom and Ariana were against it. However they were so upset that they began to yell and take it out their frustrations on Katie because she was the only one to tell them that if they were fine with James coming (despite Jax’s personal feeling) then they should be just as a big of a person as Jax when it comes to Kristen. Jax could have kicked up a fuss about James coming and he didn’t. He accepted Tom’s judgment and he felt that carrying a grudge would take up too much time.