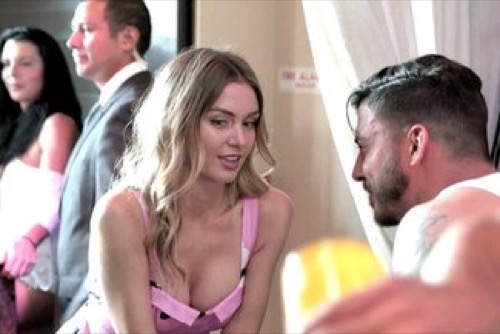 Tonight on Bravo Vanderpump Rules returns with an all new Monday December 7, season 4 episode 6 called, “Love Bites,” and we have your weekly recap below. On tonight’s episode, Lisa Vanderpump tries to outdo herself by throwing not one but two huge parties for Gay Pride. When James shows up flaunting fresh love bites, everyone wants to know which SUR girl was responsible.

On the last episode, convinced that Kristen was cheating on him, James sought revenge by hooking up with Lala. Lisa schooled her staff on fine wine, Katie and Ariana urged Scheana not to sweep marital problems under the rug, Peter chopped his ponytail, and a jealous Jax recruited Kristen in his scheme to pull Lala away from James. Did you watch the last episode? If you missed it, we have a full and detailed recap right here for you.

On tonight’s show as per the Bravo synopsis, “Lisa tries to outdo herself by throwing not one but two huge parties for Gay Pride. When James shows up flaunting fresh love bites, everyone wants to know which SUR girl was responsible. Sandoval and Schwartz kickstart Shay’s makeover, Scheana doubles down on her marriage, and Jax seizes an opportunity to move in on Lala.”

Tonight’s episode is going to be another drama packed one, which you won’t want to miss. So be sure to tune in for our live coverage of Bravos’ Vanderpump Rules season 4 episode 6 — tonight at 9PM EST! While you wait for our recap, hit the comments and let us know how excited you are about this new episode of VR tonight and what you think of the current season so far.

At Sur, Lisa tells Jax and Sandoval that for gay pride this year, she is going to focus on both Sur and PUMP. Last year, she mainly focused on PUMP and Sur didn’t get as many customers.

Scheana asks Jax if he’s jealous of James now that he is moving in on Lala, and he says no, but laughs.  In confessional, Scheana says that ever since James put headphones (he became a DJ) around his neck, girls have been swooning. She says everyone has their own taste but she can’t imagine dating someone whose clothes were smaller than hers.

Jax says that he’s sort of dating anyway, referencing Brittany, the girl who lives in Kentucky that he sees sometimes. Scheana asks what’s going on with that, and he says he sees her when she is around and that’s it.  They talk about whether Shay is going to gay pride (since there is a lot of drinking there), and Scheana says that she doesn’t want to be with someone who is dead sober, she wants to be with someone who can drink socially. Jax says that Sur is a bad place to be if you’re trying to stay sober, because it’s like a circus.

James comes over to Lala’s house to make music, the day after Kristen tells her that he has been calling her a slut and whore.  James tells Lala that he doesn’t want what happened to affect what they are doing, saying that he needs her to choose sides between him and Kristen.  Lala says that she is an adult and she has already told him she is not going to pick sides. James tells her that she was kissing him one minute and then she talked to Kristen and was mad at him. Lala basically tells him that she doesn’t want to date him and get hurt, and he asks her if it would hurt him if he saw other people. She says that she doesn’t want to talk about it. James agrees, saying “you do you and I’ll do me.

James reveals that he is into being bitten on the backs of his arms during sex.

Schwartz and Sandoval take Shay to a personal trainer as a part of his ‘transformation.’ Part of the way through, Shay goes out to the parking lot and throws up. After they’re done, Sandoval asks Schwartz if the wedding ring he is getting for Katie is almost done. He says it’ll be done in a week.

Schwartz says in confessional that while he’s excited about proposing to Katie, he is trying not to bounce off the walls in front of Shay, who is having marriage problems. Sandoval asks Shay how his drinking has been going. Shay says that the drinking was not as big of a deal as the pills, and that he was actually addicted to the pills.  Sandoval asks Shay if he feels comfortable talking to Scheana now, and Shay says it’ll definitely take time. Shay says in confessional that Scheana likes to control the relationship, but now that he has had these issues it has given her something to hold over his head. He says he doesn’t know if it will ever go away.

Scheana goes to get her name officially changed after being married for almost a year. She brings Ariana with her, and after it’s over she says she didn’t know she was ever going to be this happy again. Ariana tells her that as a couple, they are going to go through the hard times together.

Lisa Vanderpump is getting the decor for gay pride set up at Sur. “Pink it up, gay it up,” she tells the people setting up. James, who is coming to do his soundcheck, shows up late. Lisa spots some marks on the backs of his arms, and is horrified when he tells them they are scars from the battlefield of the bedroom. “No, I don’t want to hear it, Lisa says in confessional, covering her ears. “La la la la la. “Is it Lala?”

Lisa is tipped off that James is messing with another waitress at Sur, Lauren. In confessional, Lisa asks why James fraternizes with her waitresses when he lives in LA, which has a smorgasbord of young, gorgeous waitresses.

At the gay pride party at Sur, Lala tells her coworker that she thinks Jax is hot and that he has been eyeing her. Lala goes up to Jax, saying this is intense for her because she’s never worked for a restaurant before. She then asks him if they can have a “friendly” drink together sometime, and he agrees. Jax says in confessional that there may be a rumor that he and Brittany have broken up, which he may have started, but they are long distance and not committed so it’s okay.

James arrives at the party, and Lala sees the hickeys on the backs of his arms. She asks him what they are, and he admits he slept with someone. She asks if the girl is a “motherf**king cobra.” James says that she told him to be honest and that he likes to be bitten on his arms.

Lala says she told him she wouldn’t be annoyed, but she actually is, and tells him to leave. James gets closer to her, and tells her that she told him she didn’t want to be in a relationship. He says that she may be the most beautiful girl he has ever seen, but she doesn’t want to be in a relationship.  Lala tells him to back up after motioning him to move back repeatedly, and he finally does. James admits in confessional that he wanted Lala to see the scratches and know he was seeing someone else, saying he is playing her game.

Scheana asks Shay how his day has gone, and he says it’s been okay. She asks him if everyone has been trying to feed him alcohol and he says that he’s had a couple of drinks but isn’t drinking a lot. Instead, he is watching other people get shitfaced.

At Sur, Kristen and Katie talk to James’ roommate. Katie brings up the bruises on James’ arms, and the roommate reveals that James had sex with someone.  Katie says in confessional that she doesn’t understand why people are turned on by biting and scratching.

Lala talks to Lauren about James, saying that the script has flipped and now she is mad about who James is sleeping with. Lauren urges her to let go the mystery of who he slept with, telling her that for all he knows she is sleeping with someone else too.

James brags to Sandoval and Ariana about the “seven hours of sex” he had that led to his arm injuries, but still won’t reveal who gave them to him. Lala goes and talks to Kristen, asking her if she can take James back. James comes up to them, and Ariana tells him to go away. James asks if she is mad because he had sex with someone. Jax pops in to confirm his plans with Lala in front of James. James says in confessional that Jax is trying to scoop in on Lala when she’s mad at him in order to scoop some remains, and he asks if Jax didn’t just do the same thing with Kristen. After he leaves, Lala asks who he slept with and he admits it’s Lauren. He smugly asks her what Lauren has been doing, lying to her face all day?

Lala asks if she should beat him up or Lauren, then rushes into the bar and confronts her. She asks Lauren if she’s going to admit that the guy she slept with last night is James.  Lauren says she isn’t going to talk about it, and storms off.  Lala asks where Anthony, the bartender Lala is dating, is. For revenge, Lala tells Anthony what she did and he confronts her.

Jax and Lala talks, and Lala says she is over James. She says she thought she and Jax would connect because he seems like he is real with her, unlike James. Jax invites her to Tom’s, and they leave.  “Is she going home with them?” Katie asks as everyone sees them walking off the premises together, holding hands.