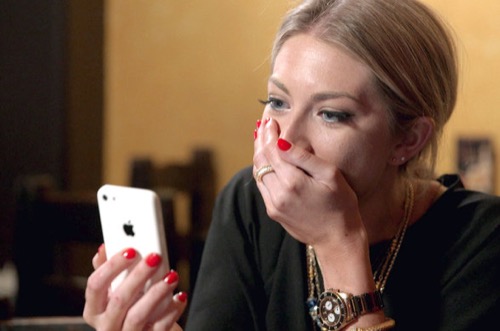 Tonight on Bravo Vanderpump Rules returns with a new Monday February 16, season 3 episode 16 called, “Ring on a String,” and we have your weekly recap below. On tonight’s episode, Scheana Marie breaks down when her plan for a perfect wedding falls apart. Kristen Doute lives up to everyone’s worst expectations when she fights with James at the reception.

On the last episode, The SUR crew came together for Scheana’s wedding, but Scheana melted down as the day of her dreams spiraled into a nightmare. James confronted Kristen over her continued obsession with Tom Sandoval. Jax, Tom Sandoval, and Tom Schwartz debated the merits of marriage. Did you watch the last episode? If you missed it, we have a full and detailed recap right here for you.

On tonight’s show as per the Bravo synopsis, “Scheana breaks down when her plan for a perfect wedding falls apart. Kristen lives up to everyone’s worst expectations when she fights with James at the reception. Tom Schwartz makes a bad situation worse when his apology gift to Katie leads to tears.”

Tonight’s episode is going to be another drama packed one, which you won’t want to miss. So be sure to tune in for our live coverage of Bravos’ Vanderpump Rules Season 3 episode 16 — tonight at 10PM EST! While you wait for our recap, hit the comments and let us know how excited you are about the new episode of VR tonight.

On tonight’s all new episode of “Vanderpump Rules”, all Scheana wanted was to have her dream wedding and yet her wedding coordinator kept on making mistakes. And they were simple mistakes too. Though they kept on derailing the wedding and were thus considered to be ruining want should have been an easy going day.

However all was not lost. The wedding itself was beautiful. Scheana’s wedding was beautiful and there’s no one that disagrees with that sentiment. If anything some were shocked Scheana could even afford such a venue. Yet Lisa later on let a friend in on the secret. Apparently, Scheana had used her previous settlement to get the place and while some were appreciative of her efforts – others like Stassi who weren’t invited decided to crap on the event.

Stassi saw pictures of the wedding on instagram and instead of being happy for a girl that used to be her friend – she and her latest lackey cackled about the wedding dress which Stassi said was the ugliest thing she ever saw. The wedding dress was embellished two-piece and Stassi called it trashy. And she also few other things but it kind of all sounded the same. Like a hater hating!

Then she said she would have liked to have been invited in order to take advantage of the full bar but that she was glad she wasn’t willing to sell her principles to get invited. And, well, this was a well-known dig at Katie. Katie, another one of Stassi’s former friends, had gone to the wedding and despite not being Scheana’s biggest fan – she enjoyed herself.

Like come on it’s a wedding. No one should be taking anything too seriously and out of Katie and Schwartz – it was Schwartz that was feeling moody about the whole day. He said he could picture himself getting married in his aside and while that’s nice – he didn’t really follow that up when he eventually talked to Katie. It seems he realized he hasn’t been that much of a boyfriend lately and he wanted to show her he was committed. And he did that by giving her a ring on a string.

Schwartz ended up giving her a necklace and Katie told him that’s not what a woman pushing thirty wants.

Katie was actually fine just watching the wedding. She wasn’t exactly making up lists about what she would want at her own wedding. Yet when Schwartz gave her that necklace – that’s when she started to think about their future.

She’s now wondering how long can she wait for him!

As for the rest of the reception, nothing else went to plan. Scheana’s wedding planner didn’t do anything she was supposed to. The cake-cutting and the bride throwing her bouquet was put off till almost the very end of the reception. So, naturally, the bride was upset.

She had told this woman her dreams and the planner fell flat on practically everything. And funnily her excuse was that she had inadvertently let the DJ dictate to her. As if that makes any kind of sense. So Scheana was in tears at her own reception and her friends had to do their best to cheer her up.

And, you know, after the emotions were calmed – things did get back on track. Scheana got to do most of what she wanted so in the end she enjoyed her wedding.

But there were other people at the reception that didn’t get their happy ending. And they were James and Kristen. James got drunk and apparently that finally gave him the courage to question Kristen about certain things.

He wanted to know why she had gotten over Tom and in order to escape him – Kristen went off with another guy and James pursued them. James’s actions that night were probably not the wisest but he did all of that because he essentially wanted to know if she cared about him as much as he cared about her. And it turns out she didn’t.

Going off with another guy, even as boyfriend is upsetting you, was not the smartest thing to do either! And after James chased after the, he got in a huge fight with Kristen. Where she dumped him and even punched him.

It’s unclear about which came first!

So, when James did return to the rest of the reception, he came back with a bruised face. Although, he didn’t let a little thing like that stop him from enjoying the rest of his night. He and the rest of the crew from Sur kept partying and they all had fun. Including Katie who eventually got over her ring on a string.

Katie had decided to put all past grudges behind her and that allowed her to enjoy herself for once. So even though Stassi continues to sit on her high horse – the only people she has left for company are “yes” men and, according to next week’s promo, Kristen.