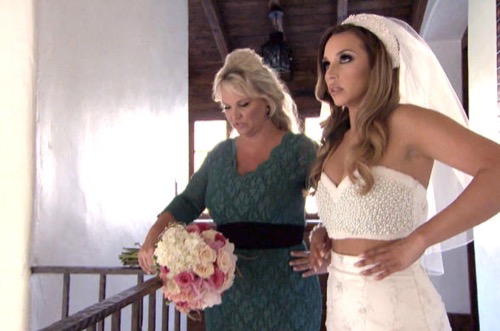 Tonight on Bravo Vanderpump Rules returns with a new Monday February 9, season 3 episode 15 called, “Judgement Day,” and we have your weekly recap below. On tonight’s episode the SUR crew comes together for Scheana Marie’s wedding, but Scheana melts down as the day of her dreams spirals into a nightmare.

On the last episode, Lisa confronted Kristen over her disrespect of management and arrived at a final decision on her future at SUR. Tom Schwartz made a shocking revelation to Katie about the past. Scheana debated whether to disinvite Kristen from her wedding. Did you watch the last episode? If you missed it, we have a full and detailed recap right here for you.

On tonight’s show as per the Bravo synopsis, “the SUR crew comes together for Scheana’s wedding, but Scheana melts down as the day of her dreams spirals into a nightmare. James confronts Kristen over her continued obsession with Tom Sandoval. Jax, Tom Sandoval, and Tom Schwartz debate the merits of marriage.”

Tonight’s episode is going to be another drama packed one, which you won’t want to miss. So be sure to tune in for our live coverage of Bravos’ Vanderpump Rules Season 3 episode 15 — tonight at 10PM EST! While you wait for our recap, hit the comments and let us know how excited you are about the new episode of VR tonight.

Scheana and Mike have tripled their wedding budget. Luckily, she has finally received a settlement for an injury years ago. She tells Linda she is worried about Kristen.

Everyone is in town for her rehearsal venue, and she is going to have a sleepover to celebrate with all the girls.

Katie is jealous because Schwartz doesn’t want to settle down, and she doesn’t believe his excuses anymore.

Tom made the decision in Miami to let everything that happened with James go. Now he doesn’t hate him; he just feels bad for him. Tom still vehemently denies sleeping with this girl, saying it isn’t anyone’s business. He tells James that he deserves better than Kristen, telling him to watch her behavior at the wedding because there are some things she can’t help herself from doing. He tells her not to tell Kristen until after the wedding, and he says no way because he tells Kristen everything.

Kristen and James eat dinner together, and James tells her about the “uncomfortable” conversation he had with Tom. He tells her Tom showed him messages of Kristen saying she wanted to hang out, and Kristen says she has all of those messages on her phone, every message she sent to him. She says it will take her time until she doesn’t go through little spells of giving a shit about him.

Scheana needs to pick up something she forgot, asking Kristen to go into the apartment and get it. Ariana says she doesn’t want Kristen in the place she sleeps at night, and Scheana says she’s overreacting and that Kristen has been sending her nice texts for the last few days. Ariana says she isn’t going to have people fly across the country to ruin people’s lives and then be normal four days later.

Kristen arrives with it, avoiding Ariana. Meanwhile, Scheana asks if she is okay and Ariana talks about how “physically uncomfortable” she is.

At the wedding, Schwartz jokingly asks Katie if she sees any good prospects. “I could throw a stone right now and hit a better prospect, so you better shut up,” she says in confessional.

Scheana’s wedding dress has a matching crop top.  Scheana is furious when she is supposed to be going down the aisle and the guys aren’t even ready yet. Her wedding coordinator rushes to get them out. She has to hide in a closet so the guys can walk by to get out of the house.

When she gets out, the singer has started before she is in place. She panics, yelling to have her stop and start over. She needs to be there for a specific part of the song. After the singer is done with the entire song, she orders that the singer sing the song again.

“Thanks, wedding coordinator, for f*king up your only job,” she says in confessional.