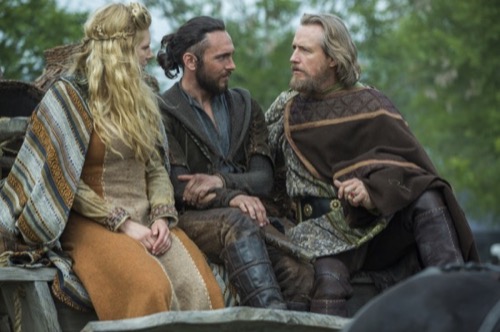 Tonight on the History Channel Vikings returns with an all new Thursday, February 19 season 3 premiere episode called “Mercenary,” and we have your weekly recap and spoilers below. On tonight’s episode, King Ecbert [Linus Roache] proposes a deal to the Vikings in the Season 3 premiere.

On last week’s Ragnar and King Horik returned to Kattegat and the final showdown between two Viking leaders was at hand. King Horik wants Ragnar out, but how did he do it? Not by getting his hands dirty, he used Floki and Siggy. Did you watch last week’s episode? If you missed the episode we have a full and detailed recap, right here for you.

On tonight’s episode as per say the History Channel synopsis “King Ecbert proposes a deal to the Vikings in the Season 3 premiere. Later, Ragnar leads his forces into battle.”

Tonight’s episode looks like it is going to be great and you won’t want to miss it, so be sure to tune in for our live coverage of The History Channel “Vikings” at 10:00 PM EST! While you wait for our recap hit the comments and let us know how excited you are for the season 3 premiere of Vikings tonight.

Tonight’s episode of Vikings kicks off with a wise man giving Lagertha a prophecy and what he sees in the future for her. The prophet says that he doesn’t see any more children in her future, he just sees a harvest season of blood – Lagertha asks him when she will die, and the wise man laughs in her face and tells her to come back some other time if she really wants to know. Bjorn and Ragnar head up in to the mountains in the snow that are overlooking their village, Bjorn vows that they will go back to Wessex to reclaim what is theirs.

Floki is lying on the docks, He whines to Helga that he is “trapped in the happiness” he rants that everyone there is too happy for him to be around. Helga tells him that if he isn’t happy then he can leave them and go with the other men to Wessex. Floki storms off and screams that Helga is “too good!” In his tent Ragnar watches Aslaug carry about their child with birth defects, who is about a year old now, and won’t stop crying. Aslaug cries that she doesn’t know how to help the baby. She asks Ragnar if he loves the baby and Ragnar snaps that of course he does. Aslaug asks Ragner if he loves her, and he doesn’t answer. In Scandinavia Lagertha suits up and leaves the village to head to Wessex – as soon as she is gone there are whisperings among some of the men about overpowering her and betrayal.

At dinner Torstein whines to Bjorn that he has a huge problem, he has gotten two different women pregnant with his baby. The other men tell him to just marry one and make the other his concubine. Torstein snaps that he can’t do that because the two women hate each other – he just needs to ship out to Wessex as soon as possible.

The next morning Bjorn and the rest of the man head down to the beach to prepare their ships for the journey to Wessex, Floki dances around and giddily squeals that he can’t wait to leave. Lagertha arries and Bjorn explains his girlfriend refuses to stay behind – even though she was pregnant. The ships sail off, and the women remain on the beaches waving their goodbyes.

Ragnar, Lagertha, and their men arrive in Wessex, they announce that Florick is no longer with them. They sit down for a feast with the King of Wessex, the Princess of Mercia announces to Lagertha and Ragnar that she needs them to fight in her army to protect Mercia. Lagertha rants that they came to Wessex to farm the land, not participate in someone else’s war. After some persuasion, Ragnar and his men agree to help fight for Mercia in exchange for the farmland from King Ecbert that they were already promised before they arrived.

The next day Ragnar, Lagertha, and the rest of their men prepare to fight for Mercia, even Athelstan is preparing to go with them. Bjorn tries once again to reason with his pregnant girlfriend and convince her to stay behind and not go fight in the battle. King Ecbert arrives and climbs in the wagon with Lagertha and Athelstan, they are both shocked to see him tagging along seeing as how he never gets his hands dirty. He jokes that he can come with them if he wants to because he is King.

Ragnar and the men arrive at the beach and board ships to head to Mercia. Ragnar sits down with the Princess and tries to talk to her about being ousted by her Uncle Britwolfe and dethroned by him and her brother. The Princess insists that her Uncle used magic to turn her brother against her. Ragnar laughs that just because she was deceived doesn’t mean that it was magic. The ship with Ragnar and his few dozen men is about to land in Mercia. The beach has two HUGE armies waiting for them, Mercia has easily ten times the number of men that Ragnar does. Bjorn tries to urge him to turn the ships around because they are seriously outnumbered.

Ragnar considers leaving, but he assesses the situation and says that there is no bridge at the beach for Mercia to retreat and he thinks that they can take them because the army is split in half on different sides of the beach. Ragnar and his men rush in – and he warns the Princess to stay out of their way. They rush the beach and begin attacking Britwolfe and his men, who appear to be no match for Ragnar’s barbaric army. Ragnar and Floki slice their way through the army and kill the Princess’s Uncle Britwolfe – she sobs from the boat as she watches from where Ragnar left her.