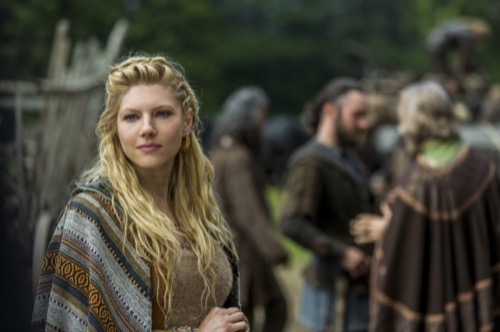 Tonight on the History Channel Vikings returns with an all new Thursday, February 26 season 3 episode 2 called “The Wanderer” and we have your weekly recap below. On tonight’s episode, a mysterious wanderer arrives in Kattega.

On the last episode, King Ecbert proposed a deal to the Vikings in the Season 3 premiere. Later, Ragnar lead his forces into battle. Did you watch last week’s episode? If you missed the episode we have a full and detailed recap, right here for you.

On tonight’s episode as per the History Channel synopsis “a mysterious wanderer arrives in Kattegat; Lagertha and Athelstan establish a Viking settlement.”

Tonight’s episode looks like it is going to be great and you won’t want to miss it, so be sure to tune in for our live coverage of The History Channel “Vikings” at 10:00 PM EST! While you wait for our recap hit the comments and let us know how excited you are for the season 3 episode 2 of Vikings tonight.

Tonight’s episode of Vikings picks up where we left off last week, Ragnar and his army have just finished fighting Princess Kwenthrith’s battle and killing her Uncle Britwult and getting back her territory. She rants to Ragnar that she still doesn’t believe her Uncle is dead and now she needs his head. Ragnar asks her why she hates her Uncle so much and she reveals that he and her brother used to take turns raping her when she was just a child. Floki chops off Britwult’s head and brings it to her, the Princess jumps on top of the head and begins savagely stabbing it.

Bjorn lectures his pregnant girlfriend about “taking too many risks” during the battle. She taunts him that he isn’t acting like Ragnar’s son. Bjorn asks her to marry him and she giddily accepts his proposal. In the woods Rollo and the rest of Ragnar’s men are losing it, they are either drunk or drugged – and can barely stand up, they are eating and setting up camp around Britwulf’s men’s dead bodies. Princess Kwenthrith comes along and sits down with Rollo and he tries to kiss her – she screams “no” and smacks him and storms off.

In Wessex Lagertha is sitting with King Ecbert, Athelstan is translating for them. He confesses to Lagertha that the farm land that they are using he stole from Saxons, Lagertha is concerned that they will try to take the land back and be hostile to her people. Ecbert personally gurantees their safety and security, Lagertha thanks him from the “bottom of the heart.” She reminisces that it has always been her and Ragnar’s dream to find land for their people to farm and live on peacefully. Then Ecbert makes a pass at Lagertha and asks if she “is a free woman.”

Kwenthrith’s brother and his troops are one the other side of the lake and still have not fought with Ragnar’s men. Ragnar and his troops tie the heads of Britwulf and and his mens to the boats’ masts and head across the foggy water. When Kwenthrith’s brother and his men see them coming they all retreat and run off in to the hills. Kwenthrith screams at her brother to “wait,” but he doesn’t listen. Meanwhile, in Wessex Ecbert and Lagertha arrive at the farm land that he promises her and Ragnar, he gives her a handful of dirt and says it is his gift to her. Lagertha gushes that it is worth more to her than a necklace made up of priceless jewels.

Helga, Aslaug, and Siggy all realize that they keep having the same dream over and over about a man without a face that walks through the snow without making a sound and carries a ball of flaming fire.
Meanwhile, Lagertha and her people are moving in to the house in the new village that she is setting up on the farm land that Ecbert gave to her. Ecbert tells Athelstan to say the blessing, while he is praying and blessing the house a man pushes past him and interrupts and places a doll up on a shelf and everyone watches in horror. Back home, unbeknownst to Lagertha, there is a mutiny and Elcof is taking over her village and convincing the people to help him overthrow her.

Lagetha, Ecbert, and Athelstan sit down for dinner. Ecbert has a servant bring Lagertha a platter, he tells her that “stones are much easier to wear than Earth.” Lagertha opens the package and finds a beautiful necklace inside, Ecbert joins her and helps her hook it around her neck. He gushes to Lagertha about how beautiful she looks.

Siggy wakes up in the middle of the night and is having another nightmare – she meets with Helga and Aslaug and they had the same dream about a man that was bound and bleeding out of his face, there was blood everywhere. Aslaug tries to reason with the shaken up women and insists it was “just a dream.”

Athelstan heads to confessional and a woman comes to confess her sins, it’s Ecbert’s daughter Judith. She reveals to Athelstan that she has had “impure thoughts” and has been thinking about laying naked with him and having sex with him – instead of her husband. Athelstan is speechless, the young woman runs off.

Elcof rants about Ragnar to one of his men – he sneers that Ragnar is “just a farmer who named himself King.” Elcof plans to take down Ragnar, he doesn’t want to be like him – but he wants to be as famous as him. He says confidently, “if you cut him he will bleed.”

Torstein is delirious, his arm was wounded and infected and it is getting worse and worse. He is going in to shock laying on the ground – he calls out that he needs someone to cut off his arm and it is “no longer any use for him.” Bjorn volunteers to cut off the arm almost too excitedly, Torstein turns him down and says he needs Floki to do it. They sodder axes and strap Torstein down to a board, Floki asks him if he is sure he wants to lose the arm and Torstein sneers “get on with it.” Ragnar and Bjorn hold Torstein down while he screams in pain and Floki begins chopping off his arm.

It’s time for Lagertha to head home, she and Athelstan say their goodbyes to Ecbert – Lagertha thanks him profusely for the necklace and says that it must be made by dwarves because it is so beautiful. Before Athelstan leaves he whispers goodbye to Judith. After Athelstan and Lagertha leaves, Ecbert warns Judith about falling for him.

Ragnar and his men find the Princess’s brother and his troops hiding up in the hills – they know it is a trap and they are drawing them away from their boots but they prepare to go to battle anyways.

Helga is walking through the village when she sees a man in a black coat running towards her, he holds out his hands which are dripping blood, it falls in to the snow just like in her dram – he pleads with Helga to help him. Meanwhile miles away Athelstan stumbles in to the lodge and holds his hands out to Lagertha – he is dripping blood from his hands as well.