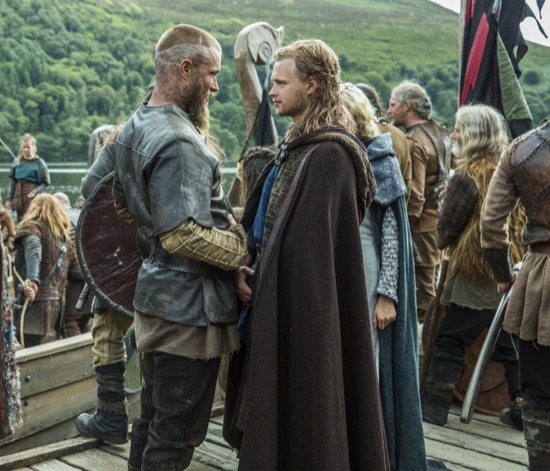 Tonight on the History Channel Vikings returns with an all new Thursday, March 26 season 3 episode 6 called “Born Again” and we have your weekly recap below. On tonight’s episode, Rollo [Clive Standen] contemplates the Seer’s [John Kavanagh] prophecy regarding his destiny, while Kalf [Ben Robson] arrives in Kattegat.

On the last episode, the fleet returned to Kattegat to discover tragic circumstances awaited. Did you watch last week’s episode? If you missed the episode we have a full and detailed recap right here for you.

On tonight’s episode as per the History Channel synopsis “Rollo contemplates the Seer’s prophecy regarding his destiny, while Kalf arrives in Kattegat and joins the Viking fleet as the raiders set sail up the Seine for Paris. Later, babies are born to both Porunn and Judith.”

Tonight’s episode looks like it is going to be great and you won’t want to miss it, so be sure to tune in for our live coverage of The History Channel “Vikings” at 10:00 PM EST! While you wait for our recap hit the comments and let us know how excited you are for the season 3 episode 6 of Vikings tonight.

Tonight’s episode of Vikings kicks off with Athelstan telling Ragnar all about Paris and what kind of defense syste they have – Ragnar plans to attack the city and take it over. Floki watches them from a distance, disgusted. Inside a tent, Aslaug and Helga are helping Bjorn’s girlfriend give birth to their baby – she screams that she doesn’t want the child. Bjorn snaps that he does, the baby finally is born and she is perfectly healthy despite that her mother was badly injured in battle. Bjorn announces he is going to name the baby girl Siggy.

Later that night Floki runs in to Ragnar’s tent and wakes him up. He has a farmer with him. The farmer sobs to Ragnar that King Ecbert’s son and his troops destroyed their entire village and killed everyone – including the women and children. Ragnar vows that King Ecbert and his son will pay. FLoki argues that it is Athelstan’s fault too, because he convinced them to do business with Ecbert. Ragnar won’t hear it though. Floki leaves, and Ragnar tells the farmer that he can “go be with his family now” and then he chokes him until he drops dead. Ragnar heads in to Aslaug’s tent and wakes her up – he tells her that she could have slept with another man in front of the children for all he cared, as long as he looked after them. Aslaug screams at Ragnar and hits him, and he ignores her and leaves.

Athelstan wakes up in the middle of the night after a nightmare. Meanwhile at King Ecbert’s village, Athelstan’s son is born by Ethelwolf’s wife. He tells her congratulations and then soldiers march in and drag her out of the room kicking and screaming. She is dragged outside and tied to a stake – and the entire village gathers around her while Ecbert and Ethelwolf look on. A pope speaks and announces that Judith has been found guilty of adultery and as per the holy book – her punishment is that her ears will be cut off. Ecbert gives her a chance to save her ears and reveal who the father of the baby is – she refuses. After a soldier cuts off one of her ears she sobs that the baby’s father is Athelstan. Ecbert stops the soldier and tells Ethelwolf that they can’t punish her for having a baby with a holy man, he announces that she will not punish Judith anymore and they will Christian the special baby and name him Alfred. Meanwhile back in his tent in Ragnar’s village, Athelstan is having a meltdown. He rocks back and forth and says “praise the Lord, you have given me a sign.”

Athelstan rushes to Ragnar’s tent and excitedly tells him that he was born again and he is Christian again – he tells Ragnar that he can’t honor his God anymore and he is going to leave the village. Ragnar snaps that Athelstan can’t leave him because he is the only one that he trust and he loves him. Athelstan reassures Ragnar that it doesn’t matter where he goes – what matters is where Ragnar is going. Outside Bjorn finds FLoki sitting outside in the rain – he demands to know why he isn’t working on the boat. Floki explains that his heart isn’t in it and he is upset about Athelstan and the Christians. He saw Athelstan earlier that morning throwing away the necklace that he wore honoring their Gods. He tells Bjorn that he is going to finish the boats, and then he is going to go home to his old village.

Kolf arrives with his boats full of men, he plans to join Ragnar on his quest to take over Paris. Lagartha is not happy to see him, and grumbles that those boats used to be her’s. Kolf introduces Ragnar to King Horic’s son and Ragnar is shocked to see that he brought him along. Athelstan sits down with Ragnar and Kolf, and they come up with a plan of attack on Paris and how they will approach the city – since Athelstan is the only one that has been there before and he knows what to expect.

Outside at the feast everyone is drinking, Bjorn tries to seduce his girlfriend but she turns him down again. She tells Bjorn that she doesn’t want to have sex – she just had a baby and her face is scarred from when she was hurt at battle, she offers to find a nice girl that will sleep with him. Bjorn pleads with her not to be like that – but she grabs a girl by the fire and introduces them. She Bjorn him away from the fire and finds him sitting on the bluff – he informs her that he loves his wife, and then has sex with her.

Helga finds Floki in the forest praying to the gods – he begins acting crazy and shouts that the gods told him that blood had to be spilled. He chokes Helga and screams at her not to tell anyone that she saw him and then storms off. In his tent Athelstan strips off his clothes and lights a candle and begins praying and chanting to a cross. Floki storms in to Athelstan’s tent, he mumbles “Lord save my soul” when he sees Floki. Floki screams and swings his axe and strikes Athelstan’s head – he drops dead. Floki kneels over his body and dips his finger in Athelstan’s blood and then tastes it.

The next morning Ragnar heads out in the forest on his horse – he is carrying Athelstan’s body wrapped in cloth. He finds a clearing by the stream and drops Athelstan’s body and prepares to dig a grave – he mumbles that this is “as close to Athelstans God as he could get him.” Once Athelstan is buried, Ragnar sits down and talks to him. He thanks Athelstan for everything he taught him, and says that in his eyes he was fearless because he dared to question his religion. Ragnar cries as he makes a cross out of rope and sticks to put on his grave and shouts that he hates Athelstan for leaving him.