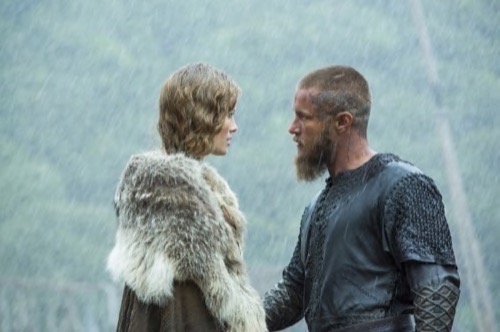 Tonight on the History Channel Vikings returns with an all new Thursday, March 19 season 3 episode 5 called “Usurper” and we have your weekly recap below. On tonight’s episode, the fleet returns to Kattegat.

On the last episode, an alliance angered Floki; Princess Kwenthrith made a political move. Did you watch last week’s episode? If you missed the episode we have a full and detailed recap right here for you.

On tonight’s episode as per the History Channel synopsis, “The fleet returns to Kattegat to discover tragic circumstances await.”

Tonight’s episode looks like it is going to be great and you won’t want to miss it, so be sure to tune in for our live coverage of The History Channel “Vikings” at 10:00 PM EST! While you wait for our recap hit the comments and let us know how excited you are for the season 3 episode 5 of Vikings tonight.

Tonight’s episode of Vikings kicks off with Ragnar and his men at sea – headed home. Athelstan tells Ragnar a story about a village outside of Paris. He gushes that it “rises out of the water,” and is surrounded by huge walls. The churches are made out of marble and stone – and the village was full of beautiful women. They were so beautiful, he almost questioned his vows of celibacy. Floki watches Ragnar and Athelstan talk from afar – he rants that it sickens him that Ragnar is huddled up with the priest. Meanwhile, on another one of the ships Bjorn tends to his beaten girlfriend.

When they arrive at home the villagers rush to the beach to great them. Lagertha tells both of Tolstons’ pregnant wives that he did not make it. Rollo searches the beach for Siggy – Aslaug breaks the news to him that Siggy drowned and died when she was saving Ragnar’s sons from the lake. Rollo freaks out and storms off – Ragnar demands to know why Aslaug wasn’t watching their kids and Siggy was. Helga jumps to her defense and says that all three of them were taking turns watching the kids – Ragnar isn’t buying it though.

Rollo proceeds to get wasted on the boat and begins trying to pick fights with everyone – Bjorn tries to calm him down and they wind up fighting each other while everyone gathers around and hoots and hollers. Both Bjorn and Rollo are badly beaten – but Rollo continues screaming at Bjorn to hit him. He says he wants to go to the Gods with Siggy. Rollo finally has had enough and stumbles off in to the pouring rain.

Aslaug returns to her hut and Ragnar is waiting for her – he demands to know why she wasn’t watching their kids and Siggy was and what they were doing on the lake. Aslaug insists tht the boys were just being curious like their father. She tries to kiss Ragnar and he pulls away. Aslaug shouts that he had so much se in England that now he doesn’t need it from her. Meanwhile, Floki corners Helga and demands to know what really happened while they were away. He can tell that they are hiding something about how Siggy died. Helga tells Floki everything about the visitor Harvard that came from their dreams, she even confesses that Aslaug slept with him. Floki says that Harvard is a God, and he didn’t cause Siggy’s death but he gave them a new one in place of her – Aslaug will be pregnant.

A messenger arrives and tells Lagartha that Kalf has taken over her village and she has been overthrown – she is no longer the Earl. Lagartha is furious, she goes to Ragnar for help and demands that he help her take back her village. Ragnar warns that it could lead to a civil war – but agrees to help Lagartha.

Floki apparently told Ragnar about Harvard – he corners Aslaug and demands to know who the guy was. Aslaug sneers that Harvard was a good man and he cared for Ragnar’s son – the son that Ragnar always leaves behind and ignores. Ragnar picks up the baby and awakes him from a dead sleep and he begins screaming hysterically.

In Wessex Judith’s husband demands to know what s wrong with her and why she is sick – she confesses that she is pregnant. He freaks out and screams at her that she can’t be pregnant because they haven’t had sex. King Ecbert catches his son slamming his head against the wall – he tells him to come to the hall. A messenger reveals that there have been some major disputes at the settlement, and the North Men are threatening to kill them. Ecbert’s son has no qualms about leaving Judith to go deal with the boundary disputes – he volunteers to go.

Ragnar holds a meeting – he announces that they are going to attack Paris. It won’t be easy because it is a well-protected city, he tells them that Athelstan has been there and they will be “travelling with knowledge.” Everyone cheers and begins celebrating. Lagartha corners Ragnar and reminds him of his promise to help her take back the Earldom.

Ragnar makes good on his promise and he travels to the Earldom. Lagartha demands that Kalf gives back what is rightfully hers. Ragnar takes Kalf aside and says he wants to talk to him in private. He tells him about his trip to take over Paris – and he invites him to come along, Ragnar says that if he doesn’t bring his men with him then he could lose everything, even his Earldom. Lagartha reminds Ragnar that it is her Earldom – Ragnar says that it is between the two of them to figure out who is in charge and leaves.

King Ecbert’s son and his men arrive at the settlement – he is still upset about Judith’s affair and he orders them to “kill all of the Pagans.” They ride through the settlement on their horses, killing everyone in sight and slaughtering men, women, and children with their swords. A little boy runs off in to the woods and they even shoot him with an arrow to ensure there are no survivors. They light a wooden cross on fire and they all drop to their knees and pray – King Ecbert’s son announces that they “did all of this for their lord.”

King Ecbert’s men return and reveal that they slaughtered all of the Pagans – he screams that he gave the North Men his word that nothing would happen. Ecbert begins screaming at the guards to arrest all of the men for treason. Ecbert warns his son that he is “not escaping lightly,” he screams at everyone to get out so he can speak to him. Once everyone is gone Ecbert begins laughing – he thanks his son for killing the Pagans, he says that their rouse worked out beautifully and even Charlemagne would have approved.