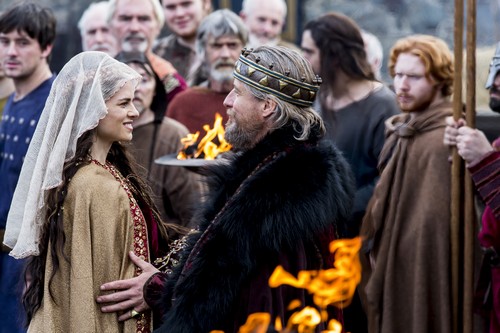 Tonight on the History Channel VIKINGS continues with another episode called, “Boneless.”  On it Aslaug prepares to give birth; Ragnar, Horik and Lagertha set sail for Wessex.

On last week’s episode Ragnar and King Horik clashed over how to dispense justice to Jarl Borg. In Wessex, King Aelle arrived and Ecbert has an eye on a new alliance.  Did you watch last week’s episode?  We did and we recapped it right here for you.

On tonight’s episode Princess Aslaug’s latest prophecy comes true, while Ragnar and Horik have very different ideas about the true purpose of their trip to Wessex.

Tonight’s episode looks like it is going to be great and you won’t want to miss it, so be sure to tune in for our live coverage of The History Channel “Vikings” at 10:00 PM EST! While you wait for our recap hit the comments and let us know how excited you are for the season 2 episode 8 of Vikings tonight.

Tonight’s episode of Vikings begins with Princess Aslaug in labor with Siggy and Ragnar by her side while the midwives work on her. Finally, her son is born.

King Horik is discussing attacking Wessex with Bjorn and Lagertha. Porunn runs and tells them that Ragnar and Princess Aslaug had a son. After Horik leaves to congratulate him Lagertha demands to know what Porunn is to him. He tells his mother that he is a servant, and he is in love with her.

Ragnar looks down at his baby and tells Princess Aslaug that her prophecy was right-she did give birth to a monster.

Lagertha boards her ship to head back to her village and prepare her fleets for their attacks. As she is leaving she asks Siggy what is wrong with Ragnar’s baby. Siggy reassures her that the baby is fine.

Princess Aslaug puts the baby to bed. Ragnar is trying to convince her to put the baby out of its misery. He says it is a runt and it won’t be able to live long anyways. Princess Aslaug won’t hear any of it.

After everyone is asleep Ragnar sneaks in and steals the baby. He takes him out in the woods with him and tells him “there is no other way.” He lies the baby on the ground and takes out his axe. He walks away and leaves the baby lying on the ground. Princess Aslaug sneaks out of the bushes and picks the baby up after Ragnar leaves, he is still alive.

Lagertha arrives home. She announces she is attacking Wessex with Ragnar and Horik. She tells her warriors to be ready to fight and prepare the fleets to leave at the next full moon.

A Princess from a neighboring village has come to visit King Ecbert. Her family is very wealthy and is currently preparing to take over Mercio. Ecbert would like to send some of his men and his son Abelwolf to help her.

Siggy pays Princess Aslaug a visit and tells her that she can’t hide the baby forever, she has to show him to the world. Princess Aslaug pulls down the baby’s blanket and shows his tony deformed leg to Siggy, she is shocked. She tells Princess Aslaug that he will never walk and she needs to put him out to die.

Lagertha returns with her fleet, and Bjorn stands on the dock to welcome her. It is time for them to leave for battle at Wessex. Bjorn chases his servant girlfriend Porunn down and tells her he will “probably die in battle” and then kisses her and she tells him that she loves him. As Floki is preparing to leave he reveals to his wife that he will ride with Horik, not Ragnar because Horik “understands the Gods better than Ragnar.” Siggy says good-bye to Rollo as he prepares to leave and tells him that she will wait for him.

En route to Wessex Ragnar reveals to Lagertha that the seer says Athelstan is alive. But, for some reason Horik led him to believe that Athelstan was dead. Meanwhile on Horik’s boat he is manipulating Floki and convincing him that the Gods want him to work for Horik.

Athelstan is in his chamber deciphering the scrolls Ecbert gave to him and Ecbert barges in and says that Northmen have just washed up ashore. Athelstan says Ecbert should try to talk to Ragnar, he can be reasoned with. Ecbert says he will try, but he has also sent for men from Kin Aello as part of their treaty just in case.

All of the North Men set up camp on the beach. Horik and Lagertha are furious because they are all supposed to be equals and Ragnar sent a messenger to tell King Ecbert that want to talk. Horik is convinced that by alerting the King they have arrived he will now attack.

King Ecbert sends his son to them, as he arrives at the beach all of the men take their positions. Ethelwulf says Ecbert wants to speak to Ragnar and exchange prisoners. He gives Ragnar a bracelet that belonged to Athlestan and Ragnar is excited to have proof that he is alive, the seer was right after all. Ragnar agrees that he, Lagertha, and Horik will come to Ecbert’s village later to meet with him.

Ethelwulf and his men ride back into the woods and leave the way that they came. Once they disappear from sight they are attacked and slaughtered by Horik’s men. Ethelwulf is wounded but the only one of the party left alive.