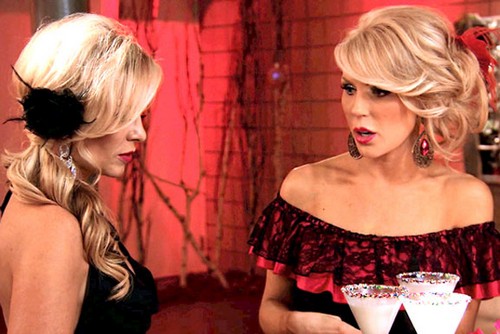 THE REAL HOUSEWIVES OF ORANGE COUNTY continues on Bravo tonight with a whole new episode called, “Chicks and Salsa.” On tonight’s episode Lydia hosts a sexy salsa dancing party — and Brooks surprises Vicki by showing up as her date.  Did you watch last week’s episode? We did and we recapped it here for you HERE!

On last week’s show in part two of Tamra’s Mexican bachelorette extravaganza, Vicki stole Tamra and Lydia away for a night of drunken debauchery, leaving Gretchen and Heather furious. It’s all poolside drama when Gretchen and Vicki finally have it out, but Tamra made a bigger splash when she revealed details of her past to Gretchen. The trip went from crazy to nuts when Mexican strippers show up, but can Lydia’s virgin eyes handle such indelicacy without sending her running for the exit? Back in Orange County, Alexis begged Jim for a gift he’s just not willing to give.

On tonight’s show Sparks fly when Alexis and Heather finally come face-to-face to settle their differences. Briana and Ryan share an emotional goodbye as he prepares for deployment. Lydia throws a sexy salsa dance party, but finds herself in the middle of big drama when Slade throws a snarky comment her way. Vicki is stunned by the arrival of an unexpected dance partner, while rumors swirl about her love life. Things get ugly when Gretchen threatens to back out of Tamra’s wedding dress shopping excursion when she finds out Alexis will be there.

Lydia is hosting a party. She wants to invite both Heather and Alexis but before she does, she wants peace so she manages to talk both of them into meeting with each other.

Vicki and Tamra are enjoying their wine labels. They sit down and begin talking. Vicki is still anti-Gretchen and Tamra will admit that Gretchen can be self-centered but they’re both her friends. Vicki is still happy about ditching Gretchen in Mexico. Something Tamra can barely remember because she was that drunk.

Heather and Alexis meet up. Each are expecting an apology and when they don’t get it the peace talks come to an abrupt halt. They agree to be respectful to each other but it’s not a friendship.

Gretchen’s mother comes by for a visit. She decided to tell her mom about what she heard about Vicki. She never used this info against Vicki despite what happened in Mexico. So she feels like she’s grown more. She then asks her mom about how she would feel about her marrying Slade and having a baby. Her mom admits that Slade has come a long way.

Brianna is with her family. It’s her husband’s last night before deploying. It’s an emotional farewell.

It’s time for Lydia’s salsa themed party. Heather and Alexis are cordial to each other. Everyone is getting along and then Laurie shows up. Tamra wanted to invite Laurie along so Lauri agree to it. Laurie begins to talk about how skinny Lydia is. Others join in but when Slade whispers to Gretchen that he’s going to call Lydia cheeseburger she takes offense. Why? She feels that if you’re going to say something about her then say it her face.
Slade is telling her to take it as a compliment but Lydia already is turned off from him.

Another surprise guest to the party is Brooks. Gretchen feels that Vicki never broke up with Brooks to begin with so him being there isn’t a surprise for her. Brooks even manages to make peace with Tamra.

That doesn’t stop Tamra from later gossiping with Laurie about Brooks’ dating life. Brooks had been partying with younger girls including a stripper/porn star.

The salsa dancing begins. Heather dropped her husband to dance with someone else instead. It’s a constant switching around with everyone having fun. Then the food joke with Lydia comes back. Lydia feels this isn’t his first time crossing the line. He did it with Vicki and now with her. Slade said he never called Vicki “Ms. Piggy”. Other people called her that and he was just letting Vicki know what was being said. Lydia feels that for a grown man he never claims responsibility.

Across the room, other people are having a good time. Tamra is talking about wedding dress shopping. But Gretchen doesn’t understand why Tamra is talking this over with Alexis of all people. After Alexis leaves Gretchen brings up the confusion. Tamra is willing to uninvite Alexis if Gretchen wants her to but Gretchen says she doesn’t know if she can go and sit there for such a special occasion if Alexis is also there.

What’s going to happen at the bridal store? Will it be Alexis or Gretchen?