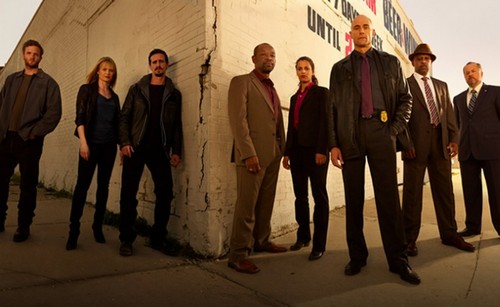 Tonight on AMC their new gritty, edgy and provocative crime drama, LOW WINTER SUN returned with their eight episode called. “Revelations”.  On tonight’s show Damon and Maya start their new lives under Skelos..  Did you watch last week’s episode?  We did and we have a full and detailed recap here for you.

On last week’s show the Callises were brought in for questioning about Billy Hobson and the connection to McCann. Agnew and Geddes wanted to pin McCann’s and Bobek’s murders on Damon. They first had to get him to confess to Hobson’s death. Damon agreed to confess, but only if they set Maya free, adding that he has other information to offer in exchange for a deal. Geddes attacked Damon, who then demanded a lawyer. The investigation now in jeopardy, Geddes gots placed on suspension.

On tonight’s show Frank testifies in court. Geddes takes his family on a trip. Damon and Maya start their new lives under Skelos.

I am so excited for tonight’s sixth episode, it looks like it is going to be a great new show, which you won’t want to miss. So be sure to tune in for our live coverage of AMC’s Low Winter Sun Season 1 episode 8 — tonight at 10 PM EST! While you wait for our recap check out the sneak peek video below of tonight’s episode!

RECAP: Frank is fixing his tie and talking into the mirror as if practicing for a speech. Joe talks to his daughter April about a girl who went missing and how people are sick in the world; he tells her you could never run a family in a ruined city. Joe notices someone following him and keeps looking in his mirror of the car. Frank is watching Katia online and calls a man to track the IP on the site to find the address. Frank then walks out of his house and notices a lot of construction going on outside and finds garbage on his lawn. Frank goes to the court and asks where Joe is, they will be testifying on a case.

Frank talks about a park ranger who was leading a school trip and found a body of some girl, there was fractures, burns and she was missing an eye. Frank mentions a knife was buried with the body and that the blade matched to the marks on the eye. Frank gets a call and meets Shaun somewhere having to pay his bail; Shaun says he needs medicine and Frank tell him to go to his place. Shaun says it’s alright and sits down; he just wants to see his kid but was mistaken for a pervert; he said he was the father of one of the kids but they didn’t believe him. Damon is arguing with his crew member who completely walks out on Damon. Joe then asks about having someone tailing him with Charles; Charles then says that he signed off for trusting Joe. Joe tells him it’s all on him and then Charles realizes something; he then starts talking about some river. Frank brings Shaun at home and Frank tells him to go see a dentist; Frank brings Shaun some pliers for his tooth hurting and throws him against the wall. Frank tells him it’s an infection and needs to take it out or he will die; he uses the pliers to rip out Shaun’s tooth.

Dani asks Frank about having to completely ignore Damon as a suspect and now they have to focus on Michael; Frank then tells her if she’s going to keep moaning about it and tells her to stop being lazy. He tells her to do her job before she bitches about others do there jobs and she also notices blood on his shirt. Frank is back in the court and the councilor then says that Frank has a service record that defies statistics; Frank then mentions they have confirmed so much of the crime. Joe then calls someone to do something; Frank then tells him how a man named Pierce offered him a job once. Joe then comes out about being tailed and mentions they should have stayed partners; Joe then says nothing bad would happened if they did. Damon and Maya come back to the bar and sitting there is the man who bailed him out of almost heading to prison; Damon questions why he did it. The man only mentions that Joe stopped him from spilling information and believes there will never be a need to kill Damon; he shows Damon pictures of kids and tells him that he will keep them safe. Joe is cooking a BBQ with his family and he has tickets to a show for them. Frank is weirdly watching Katia stripping on camera; e keeps asking her questions about where she is from and such; she keeps asking him to turn on his camera or to end it. Frank takes his laptop to Shaun sleeping on the coach and tells him to look at the screen and shows fast. She answers him more willing and she mentions she has nobody in her life and never has. She then types in a name which is Frank. Frank lets out a sigh of relief.

Frank says he could help Shaun but Shaun tells him he needs help with his sex addiction having to talk to some girl on the internet; Frank says he wants to save her from getting hur. Shaun says that it’s not him and that he also has a tail out side waiting for him who’s been out there since he brought Shaun home; Frank offers him to stay if he likes. Shaun takes the offer and mentions seeing Maya yesterday and how he saw his kids leaving school and they just walked past him; Frank tells him they were too young when he left. Shaun starts crying and says he will stay awhile; Frank pats him on the back and leaves. Dani is staring at Frank and offers her tea; she says sure and he starts making it. Frank says she should work a case how she sees best, she asks if he’s okay and Frank says yeah. Frank then says he has to get to court right away, but Dani asks if he’s okay personally. Frank says he’s fine and she says he’s so determined and that Frank inspired her. Frank tells Dani he’s been off, she mentions after both him and Katia split; but Frank says it was the right thing to do. Dani asks how they met and he mentions she worked at a casino; Frank gets a call and Dani leaves. It’s his man Cable and sees now strange hits; he has not seen the IP log on; Cable noticed how Frank hit the site so much and that someone is watching him watch her online. Back at court Frank is getting questioned hard, Frank leaves after succeeding in court and asks for Joe. Frank is getting really frustrated and is told about Joe leaving to Chicago for a family emergency.

Frank goes to the boxing gym and says he needs a lift from his friend Trey; Frank throws his bag in and then hides in the back and asks him to leave; he compliments his friends car. Trey then thanks him for helping him and then Frank gives him some directions and mentions he needs to borrow his car for a bit. Dani meets with Simon and gives him a recording; Simon and Dani are talking about him being with Katia his prostitute girlfriend and that they need to find her. Damon is planning a sort of hit on someone and that they need to get the job done; Maya tells thtno. Damon then questions her, Maya says it has all back up on him and now her kids are being used as a threat. She says that they are being owned; Damon believes killing Steve will save her kids and believes it must be done. Maya says she is not doing this and is moving in with her sister; Damon mentions he’s her family and needs her. Maya tells him she’s not having any part and he gets pissed, Joe is at the show and has his daughter and mother sitting together; while he goes somewhere else. Simon invites Charles to sit with him and Charles asks him why he’s there, Simon takes Charles to the back of a restaurant and shows him a room where Frank and Joe killed Brendan. Simon says it’s the place of Brendan’s murder.

Frank is driving in his car and looks really paranoid; he has a gun and finds. Joe goes to meet Katia and tells her she needs to disappear; he tells her he’s sorry and only wanted to scare her. Joe tells her that she will be found and wants to free her from all of it; he promises her. Katia goes with Joe and says that she is being tracked by people. Joe says he will help her get anywhere, he tells her that Frank can’t know anything. Joe asks if he reached out to her and kind of guesses he did; Joe gives Katia a bunch of money and says she can use the money to go to any city she wants by train. Joe tells her it’s a new life, Katia nods and says thank you. Frank is at some place and kicks the gate down; he walks into the place where Katia use to be staying and knocks on the door. A guy answers and tells him to leave; Frank shows his badge and starts beating the guy up. Frank barges in and goes around asking for Katia; Frank is running around and the whole house is freaking out. Joe then takes Katia and throws her out the window of the hotel room.